If you see my Facebook status updates, you may have seen a recent one in which I shared a conversation between my husband and myself. If not, here’s a recap:

Me: (Feeling giddy) I have this new recipe and I’m going to use it for dinner. It’s…well, it has this pasta…and some ummm, and..this…uh, those red things, a red pepper….I can’t remember what it’s called, but it’s good…it ummm, (sigh) it has chicken in it.

I spent the next five minutes laughing at myself, because, well, I’m funny whether I mean to be or not! Hey, at least I can laugh at myself!

Later as I started pulling ingredients out for the recipe (by memory – never a good idea) I realized that it took more than two ingredients and almost backed out! Yes, I’ve become that lazy! However, I had already made such a big deal about this fabulous meal – obviously, see the above conversation – that I had to make it. I pulled out the printed recipe and showed it to Charley and the following conversation occurred:

Me: Look, see here’s what I’m making. It has pasta…and chicken.

Me: No it’s not, there’s no title, how did you know it was lo mein?

Charley: Because it says lo mein right there.

Me: Huh. Hahaha! Ok, we’re having Lo Mein for dinner.

Seriously, I think this conversation was simply necessary as a true competitor for the previous one. It’s amazing I leave the house fully dressed, I tell you!

Anyway, I made it, despite the mess, and it was oh, so tasty. So, I thought I’d share it with you.

1 1/2 lbs boneless, skinless chicken (see, told you there was chicken in it) thinly sliced

2 green onions, cut into 2 in pieces (I forgot this part and it turned out just fine)

In a large bowl, combine the cornstarch, ginger, soy sauce, and sherry or broth until sm ooth. Add chicken and stir to coat; set aside. In a small bowl, dissolve bouillon granules in hot water; set aside. Cook linguine according to package directions.

In a large nonstick skillet or wok, stir-fry mushrooms, snow peas, red pepper, and green onions in 1 T canola oil for 3-5 minutes or until crisp-tender. Remove with a slotted spoon and set aside. In the same skillet, stir-fry chicken mixture in remaining canola oil for 2-3 minutes or until chicken is no longer pink. Stir in dissolved bouillon. Bring to a boil; cook and stir for 1-2 minutes or until thickened. Return vegetables to skillet. Drain linguine; add sesame oil and linguine to skillet. Toss to coat. Cook 1-2 minutes longer or until heated through.

And there you go! 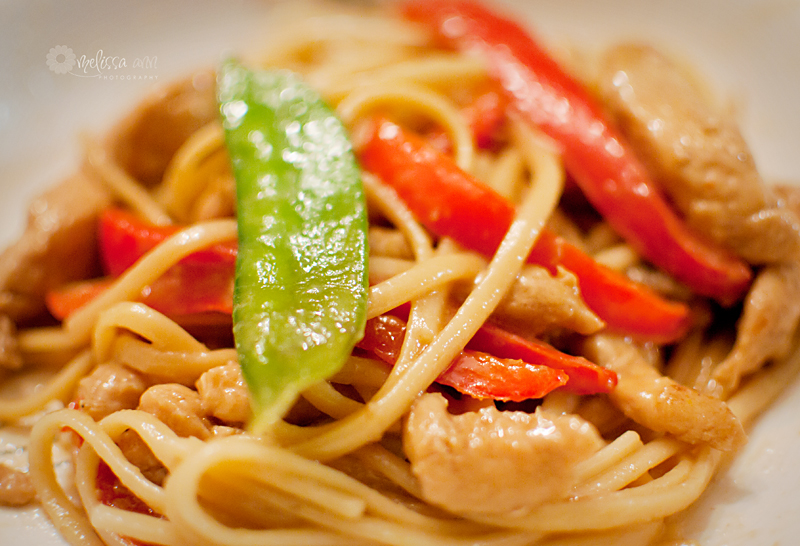