Wow! That’s all I keep thinking. I had the opportunity this last weekend to not only visit a place I’ve never been to, but also to join the masses in PPA’s biggest convention. I was once told that if I ever made it to Imaging, it would seem as though I were a kid in a candy store…I was, and I had a sugar high the entire time, followed by a sugar coma when I got home! I’m still recovering, in fact.

I arrived late Saturday afternoon after about a four hour drive…during which I realized that if photography doesn’t pan out, I could have a bright future as a rockstar. I’m quite the solo car singer you see. I digress…I met up with two of the other photographers from my area, Miss Liz and Brittany and we then met up with our other roommates, Andrea and Roni. Yes, 5 women, one hotel room, two beds…we made it work. Anyway, we got ourselves settled and began exploring a bit. I had to see Bourbon Street and play the perfect tourist and it was lots of fun. The regular Saturday on Bourbon Street reminded me of the Galveston Mardi Gras! I don’t know if I could handle the real deal in New Orleans, but it was fun to experience the typical Saturday evening! It amazes me the way that people spend their time down there. Not the drinking and partying, but the ones that set up shop in the middle of the street, many with not talent of any sort other than dressing weird or alternating between flipping you off or offering you a peace sign. The kicker is the guy that was alternating between these two personalities actually had a fairly large bucket full of money. I’d say the man is brilliant! Perhaps it was just because he was painted silver, too.

I was a little nervous to take out my camera while walking around there at first, so I started with my iPhone – forgive the grain, but it did the job for a bit. 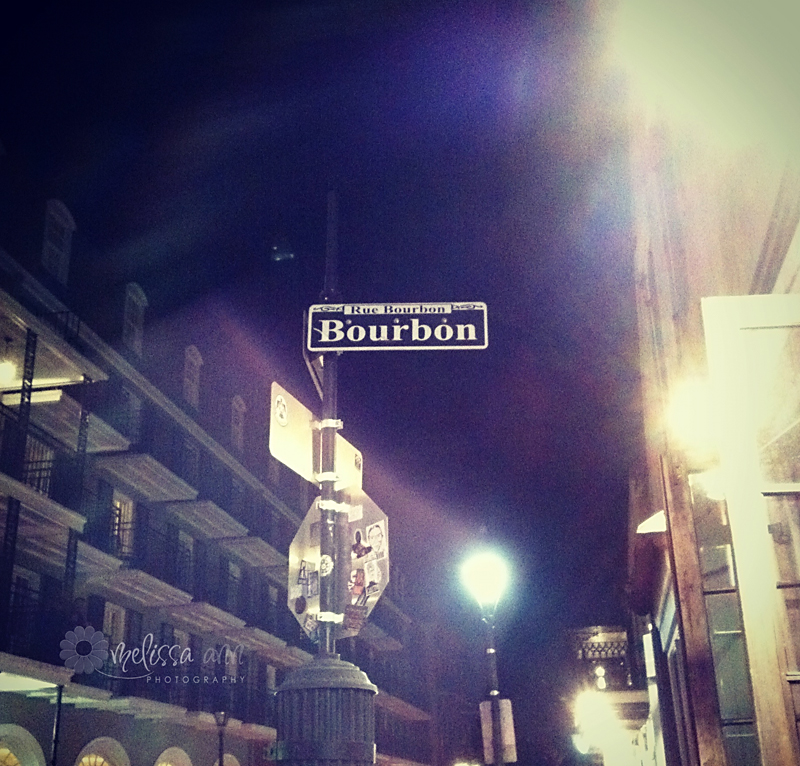 Then, I just couldn’t take it any more. I reminded myself that I was only there for one night and would be in classes all the next day, time to break out the goods…my camera that is, get your mind out of the gutter, people! 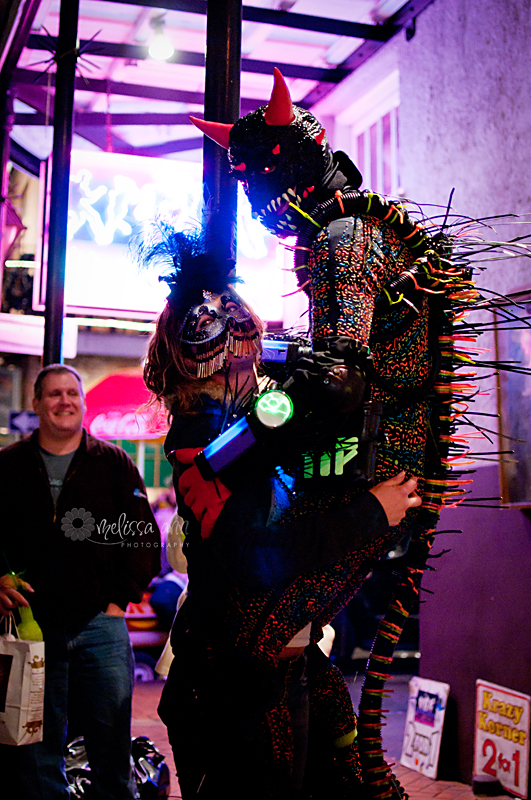 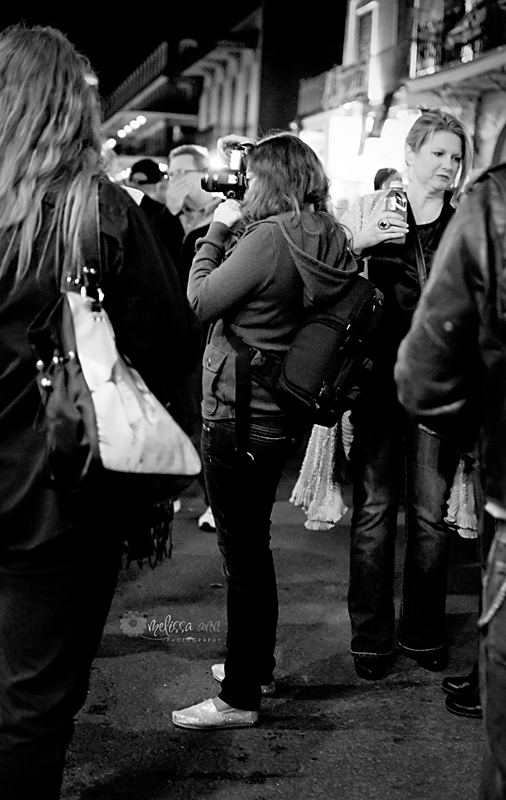 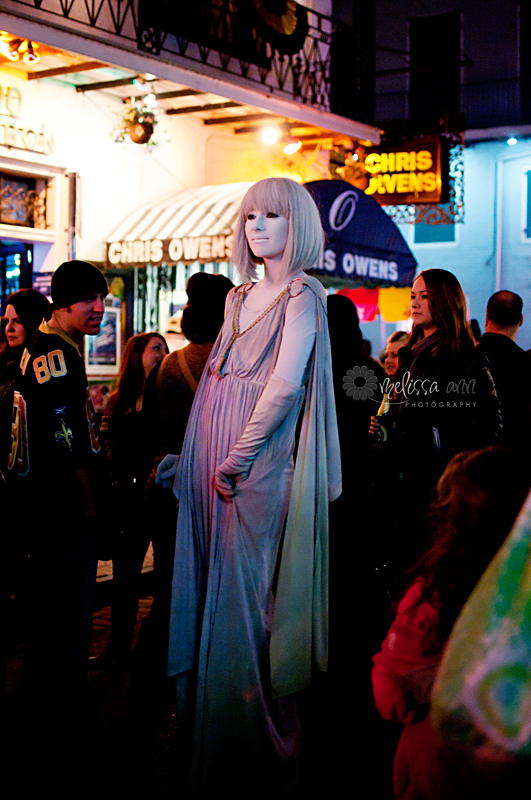 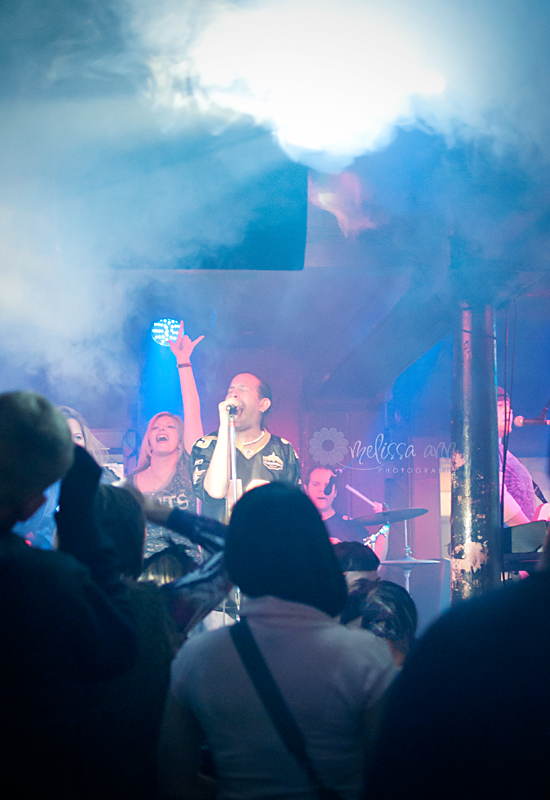 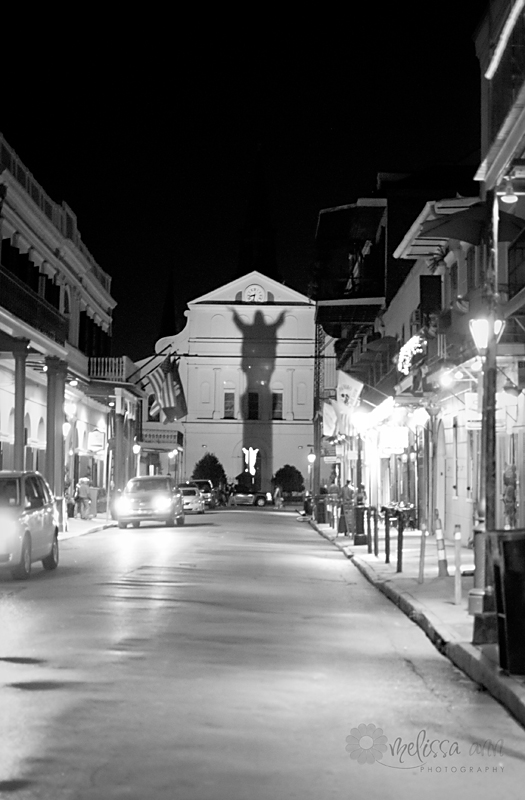 We really didn’t last long down there, but it was just enough for me. Yes, I did feel old leaving so early, (no, I’m not going to reveal how early) but I was thankful once we were back at our room. We had to be up at 5am to pick up badges and get ready for our first class at 7am. I was extra, extra thankful that we came in early seeing as how none of us slept! Three ladies in one bed does not really make for the most comfortable situation. We spent a good deal of the night barely moving afraid to bother our slumber buddies and we were awake before the alarm went off. However, the drag we felt quickly subsided and was replaced with excitement!

Can’t you practically feel the excitement yourselves from our sad attempts at iPhone self portraits? Seriously, why is it so difficult to take a picture of yourself with an iPhone?! They even give you the tools necessary by the little camera flip thing, and I still can’t get it right! Oh well, this time I blame a 5am wake up call and bad convention center bathroom lighting :). 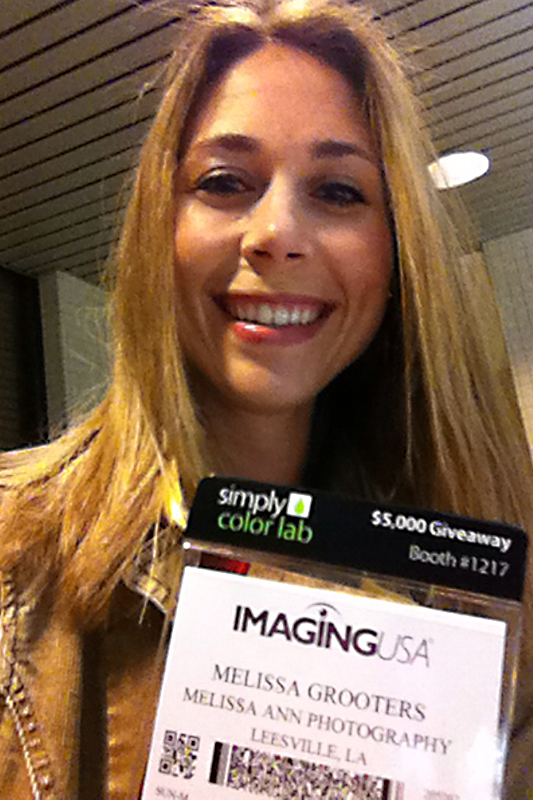 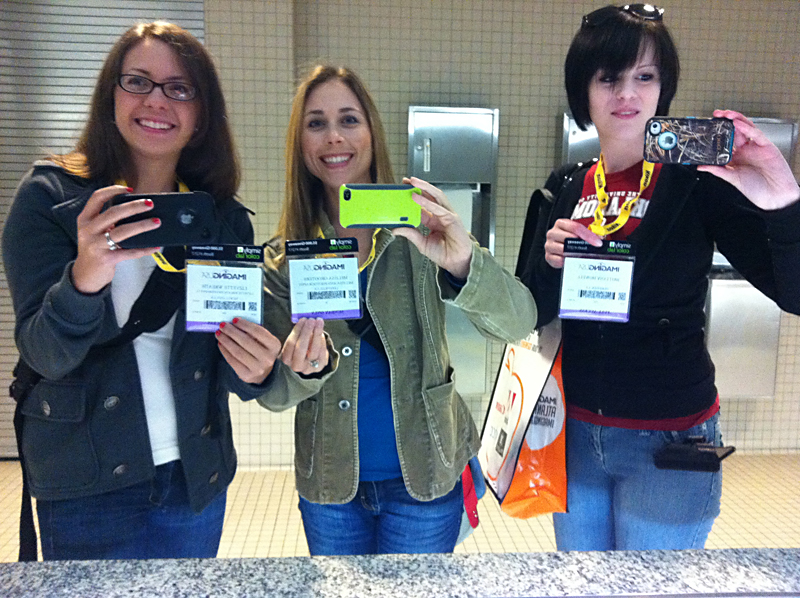 Anyway, we started out with a class about business by Kevin Kubota, a very successful wedding photographer. I loved his talk and his incredibly down to earth personality. He was quite funny, which is always good for that early in the morning. After that we split up and went to separate classes. I chose one on PPA Charities and I was in awe. What an incredible program and I can’t wait to jump in and do my part. I left there with tears running down my cheeks and I was most definitely not the only one! More on the charities in the near future. I left there with a great quote that I’ve heard before, but it stuck with me…”You never know what moment will be the one that changes your life and it often starts with a small act.” *Sigh* I love it for it’s simplicity and it’s truth.

So, the day progressed with the Imaging Expo, which I tried my very best to see every booth in about two hours, but I still missed some! It’s AMAZING! That kid in a candy store bit returned, and I frantically (ok, so I wasn’t really frantic) tried to absorb as much as possible. I visited with vendors that I love and some new ones that I’ve not seen before. I had the chance to spin a wheel to win prizes (channeling The Price is Right) and I won a pretty good discount on products. I listened to talks on packaging, gifts, the new Nikon D4 (gasp!), and basic business practices. I got to hear Jamie Schultz speak, and I love her products and her work! Here she is below snapped with my iPhone…honestly, I’m not sure if I was allowed to photograph her, so I tried to be extra secretive about it! I don’t think I’d make a very good spy. 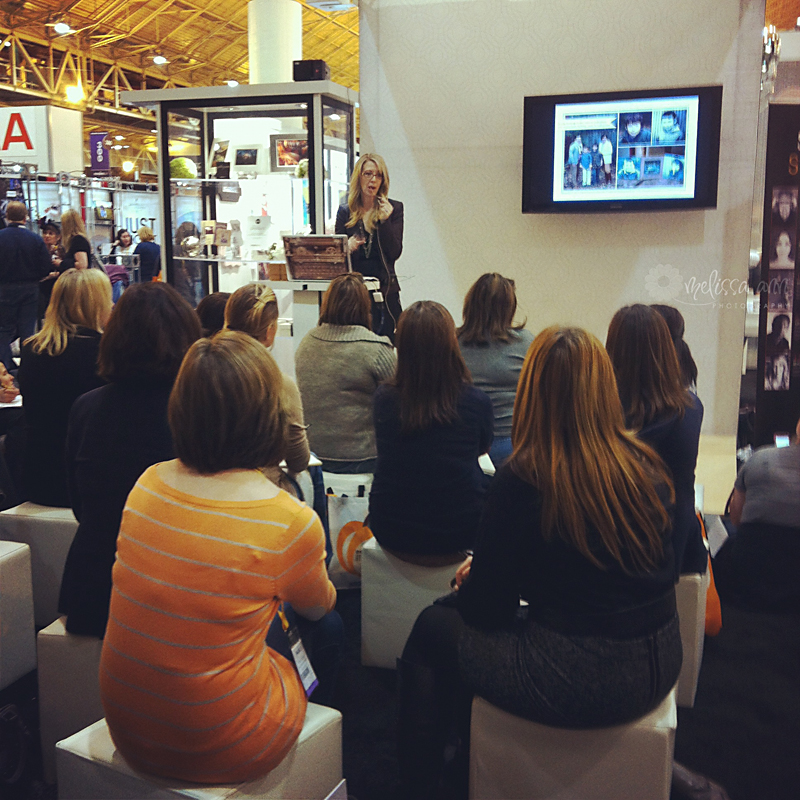 I also had a chance to meet this lady… 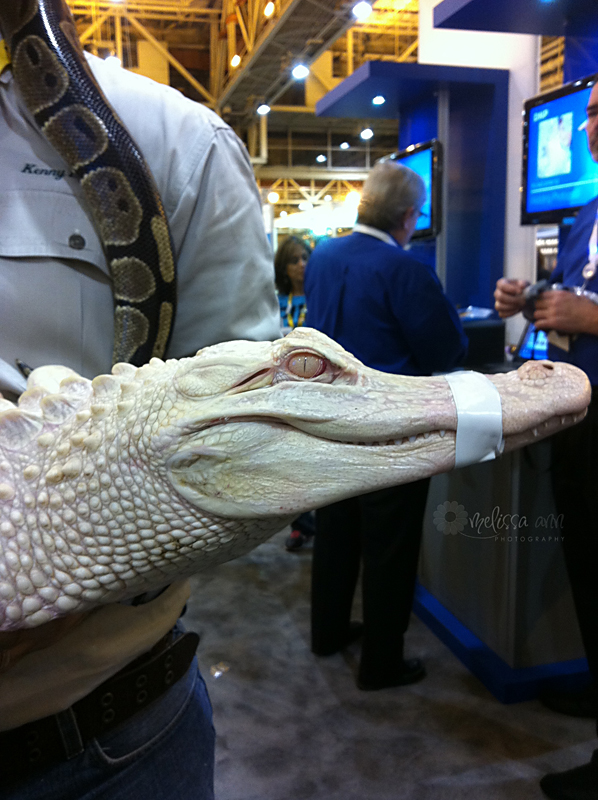 I don’t know why there was a 30 lb albino alligator at the trade show, perhaps it was just a nice little nod to being in Louisiana! Either way, I enjoyed her. I was too late to hold her and the python that’s around the guy’s neck, but I did get to pet her. She was shockingly much softer than I would have expected. As hard as it was to leave this beauty (I have a weird fascination with alligators), I had two more classes to hit. Back into study mode I went, and took so many notes that my hand was cramping. I hope I can read my writing!

Our last class ended at about 7:30. I grabbed my things from the hotel and got on the road. I had 4 hours to start processing everything that I had seen and learned and it wasn’t nearly enough! I honestly don’t know what I would have done with more information. I think my head quite possibly could have exploded! It was fantastic! I highly recommend going and next year it will be in Atlanta! Guess who’s going to start saving up now!

And with that, I’m signing off for now to go apply some of what I learned…oh, and to get the twins their breakfast, that first!