Home & The Best Homecoming Ever.

It’s funny how something can simply come to an end. All the worry, frustration, loneliness, fear, exhaustion feels as though it was all a dream, far away in the back of your mind; my dreams can be very vivid. You know that all of those feelings existed, were real, and valid, but as you approach the end…well, for me anyway, it all faded so very quickly. 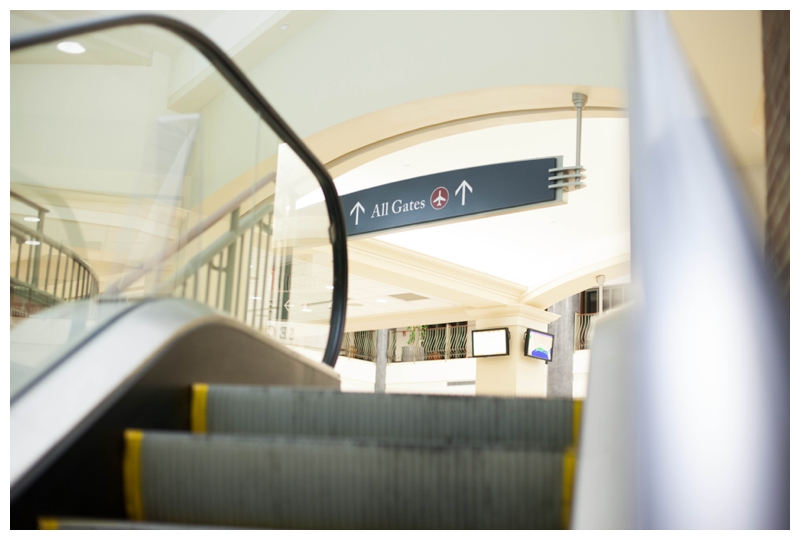 My in-laws met us at the airport after going back and forth over whether they would be here or at my house. I think this is right where they needed to be. 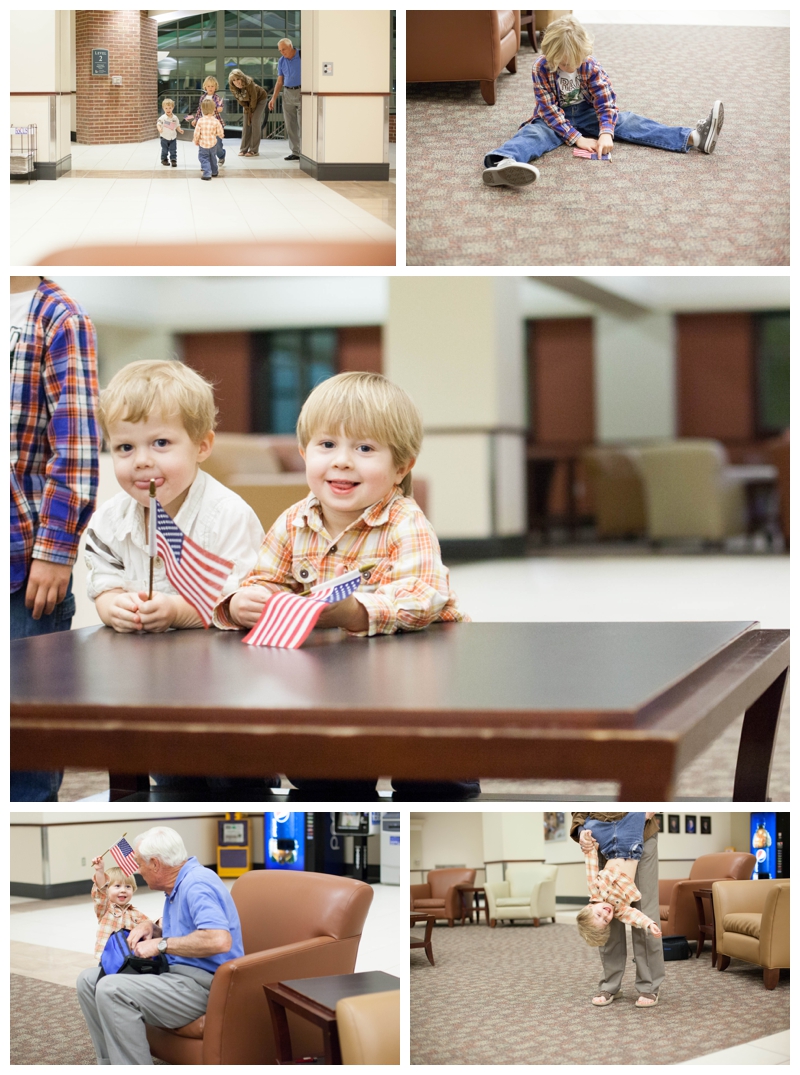 I knew Charley left Afghanistan after he was already gone. He sent me a message from Bagram telling me things were progressing nicely and he was at another USO. It was shocking to me, I really had no idea he had already been on a plane. The moment I read that message, I burst into tears. Knowing he was already off of the other base hit me hard. A little bit of the fear slipped away, fear I didn’t realize I was holding onto quite so tightly.

I knew he still had several flights to catch, but wasn’t sure how many or how long it would all take. He didn’t either, or at least he wasn’t telling me. I’m not sure how much was supposed to be kept quiet versus how much he actually knew. 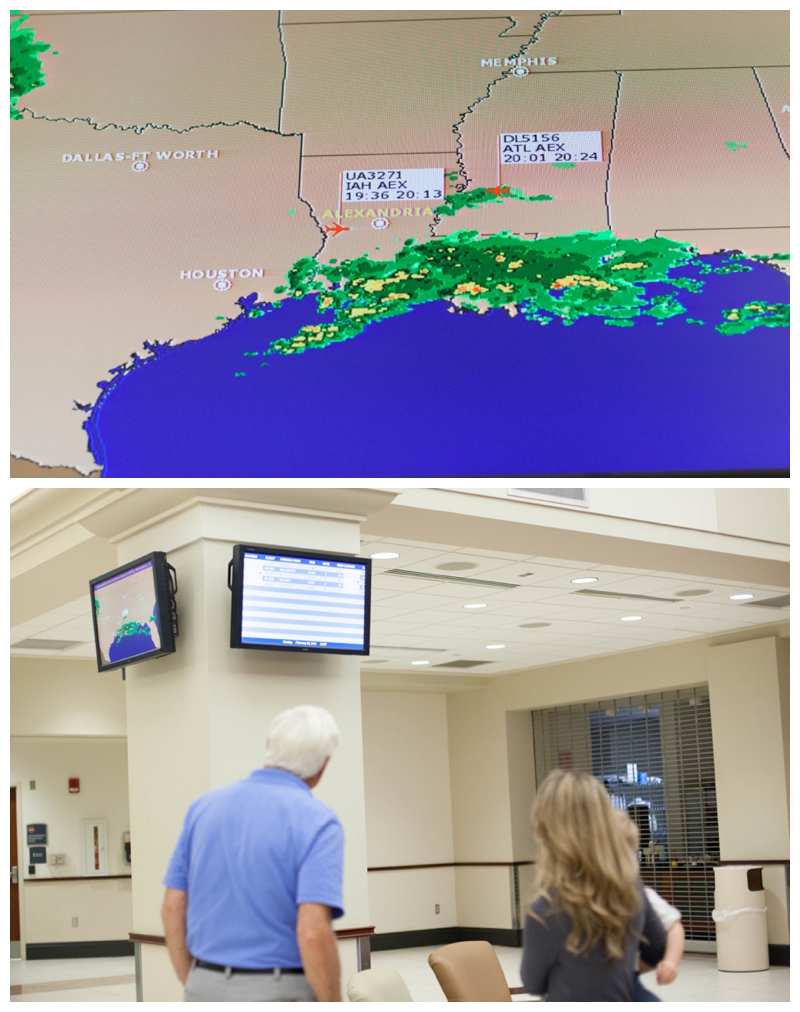 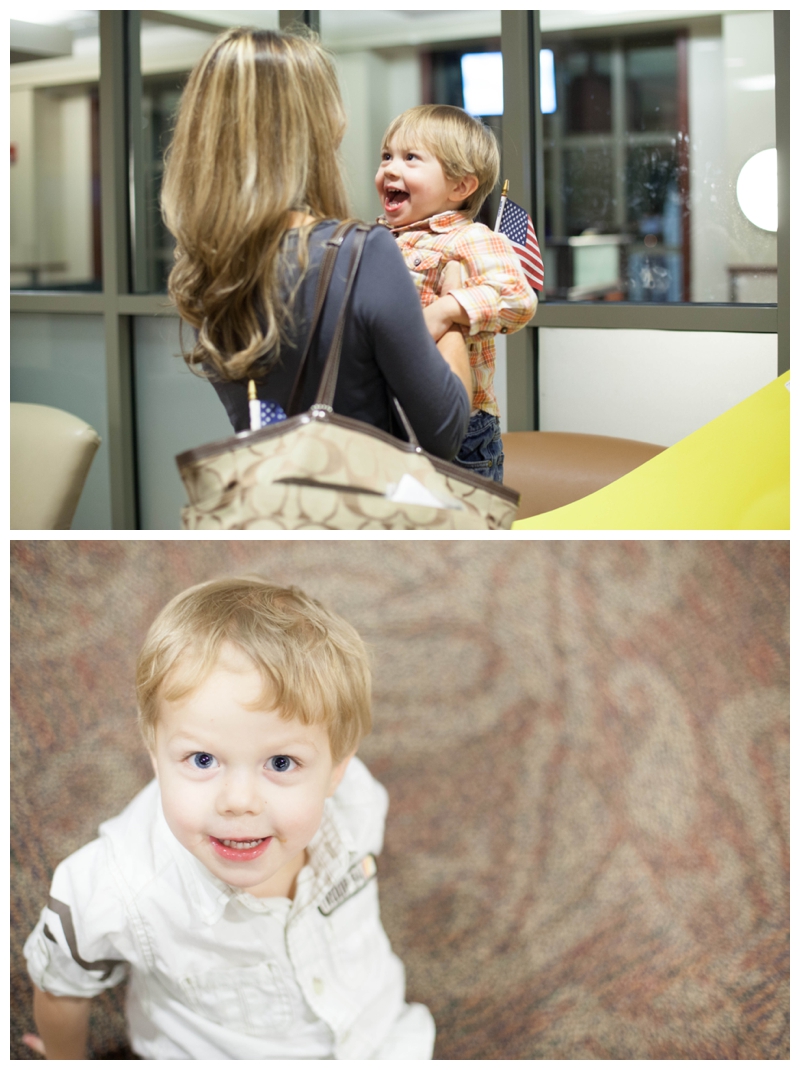 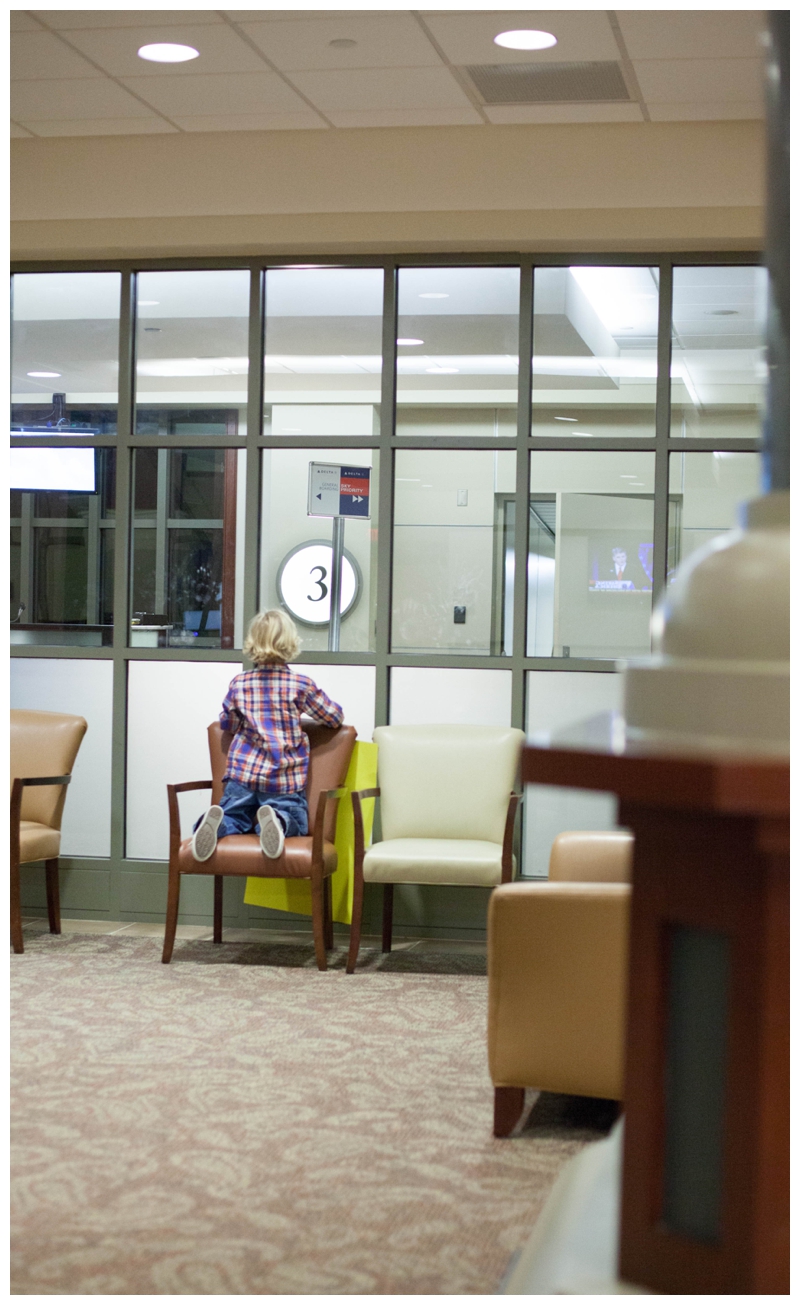 Seeing him for first time…there are simply no words, just a rush of emotions. Hearing your 2 year olds yell, “DADDY!!!” and seeing that smile on your six year old’s face is enough to throw anyone over the edge! Composure has exited the building! 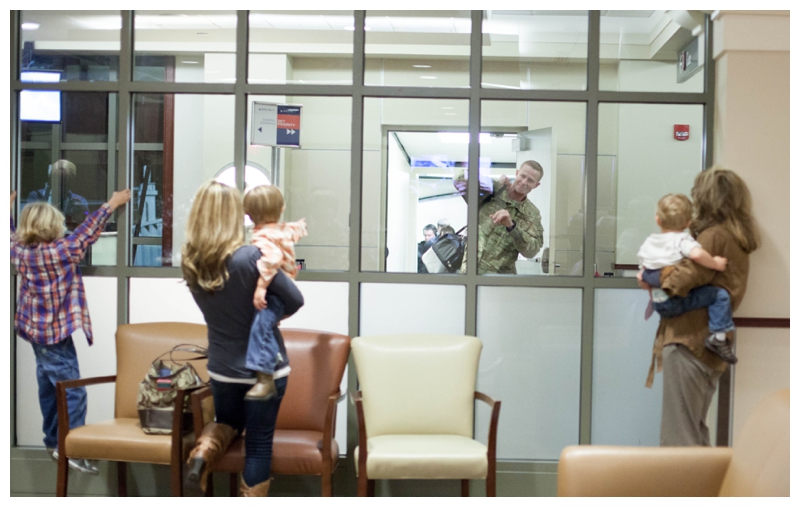 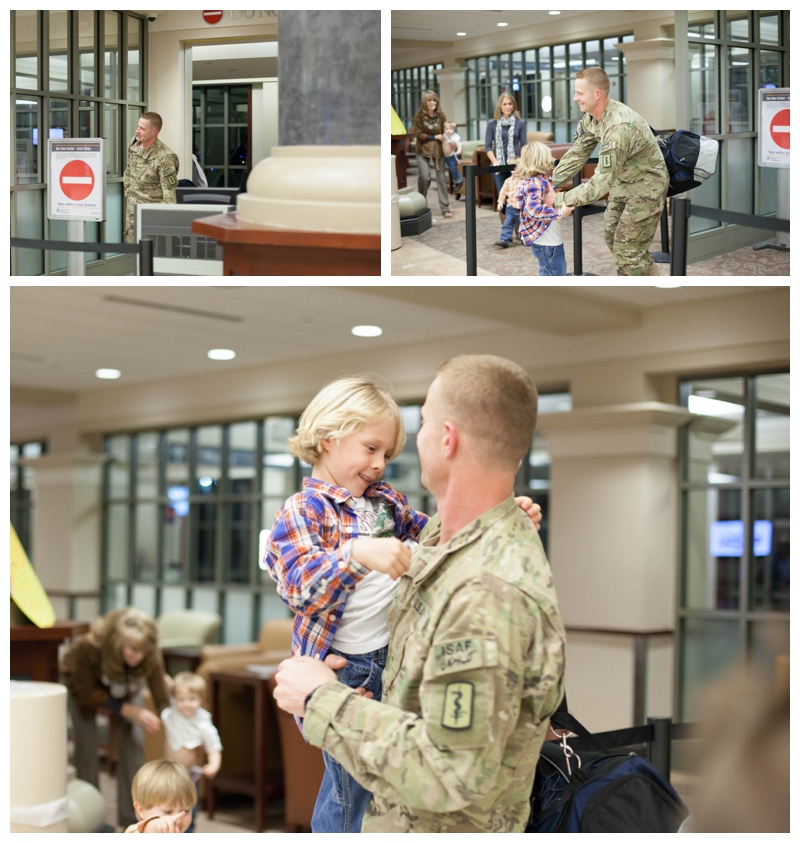 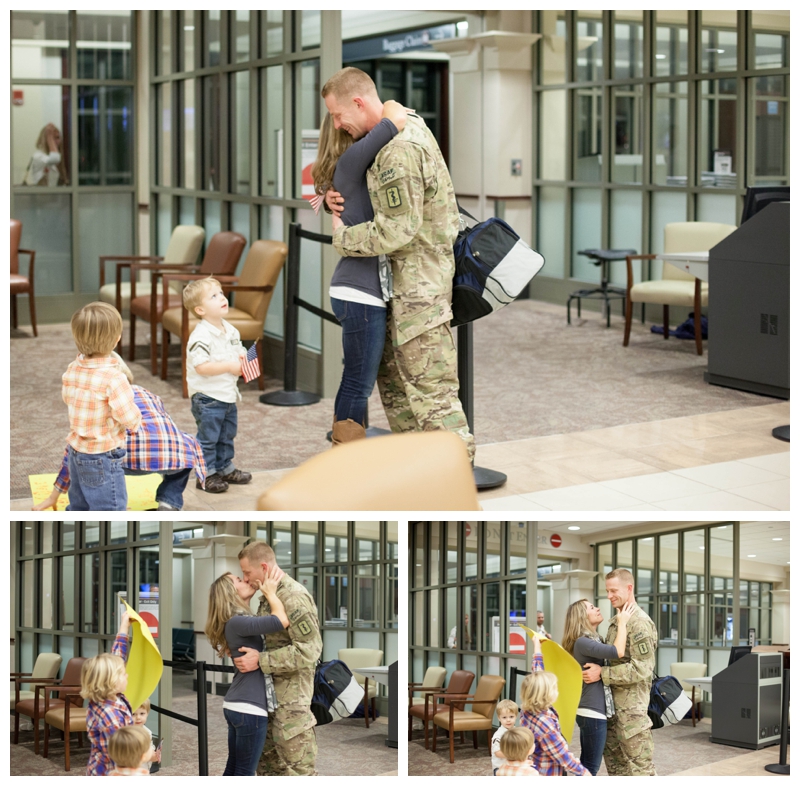 Bradley being Bradley knew who he was and was all smiles, but a little hesitant. Will being Will repeatedly said, “Daddy! Daddy!” while pointing. 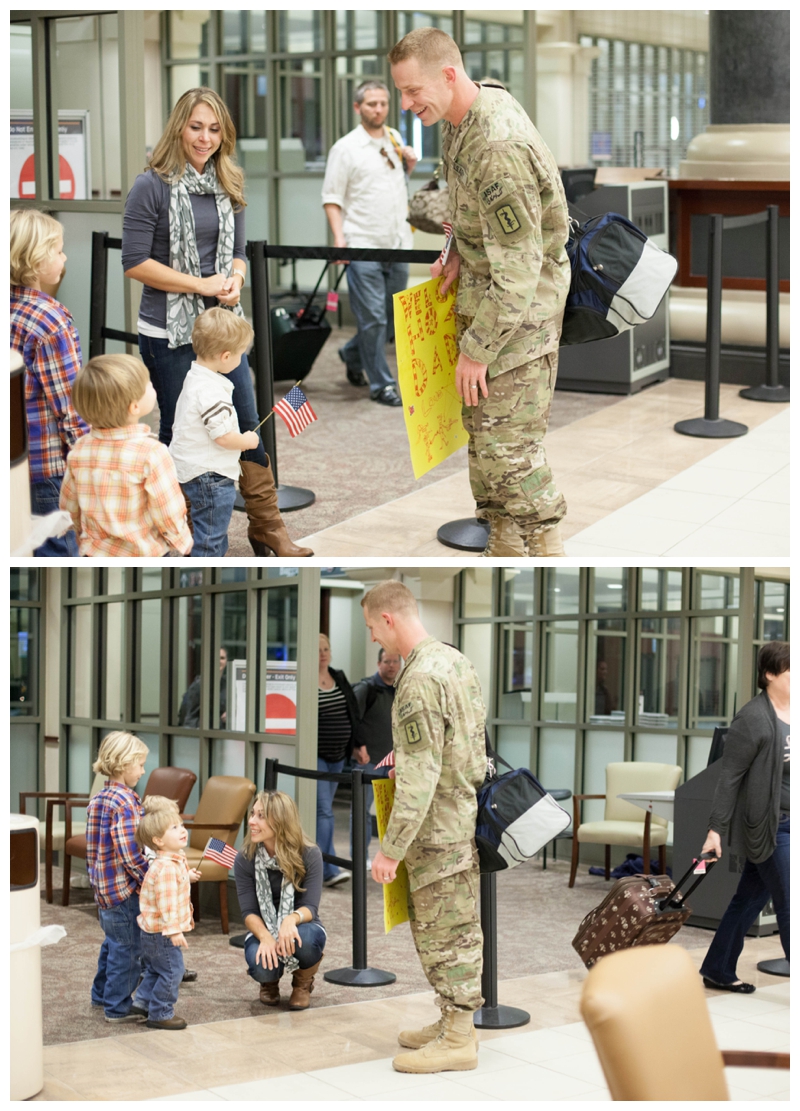 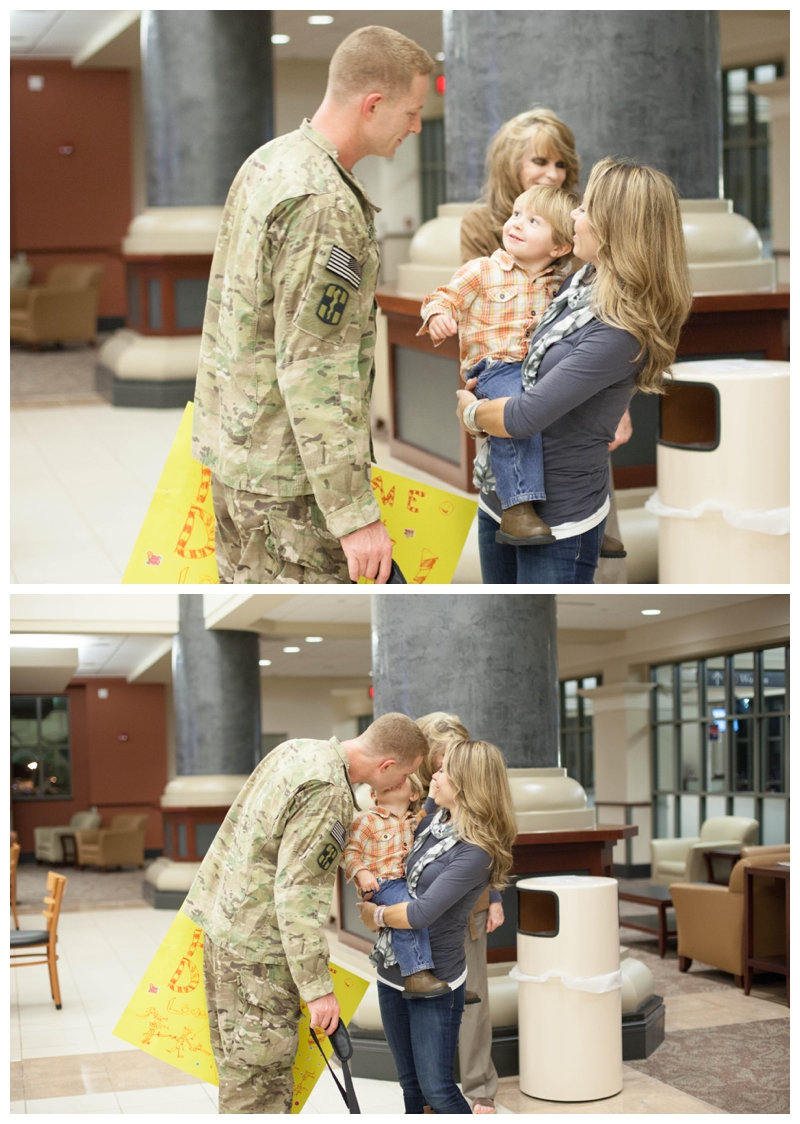 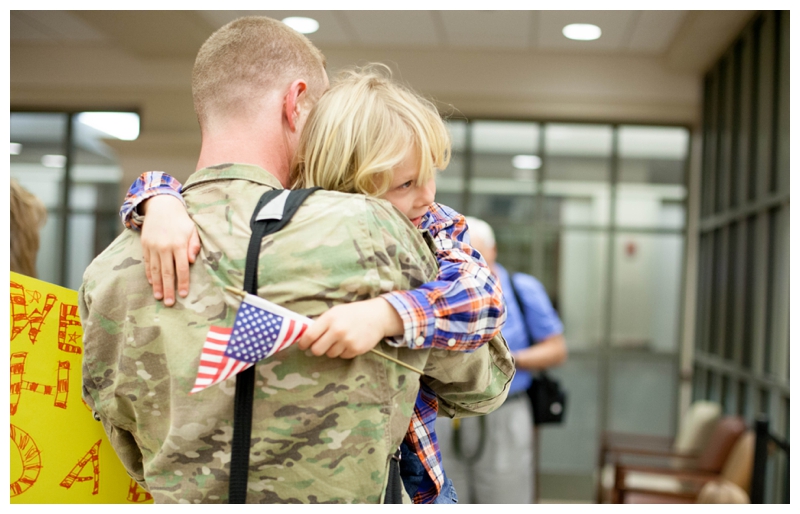 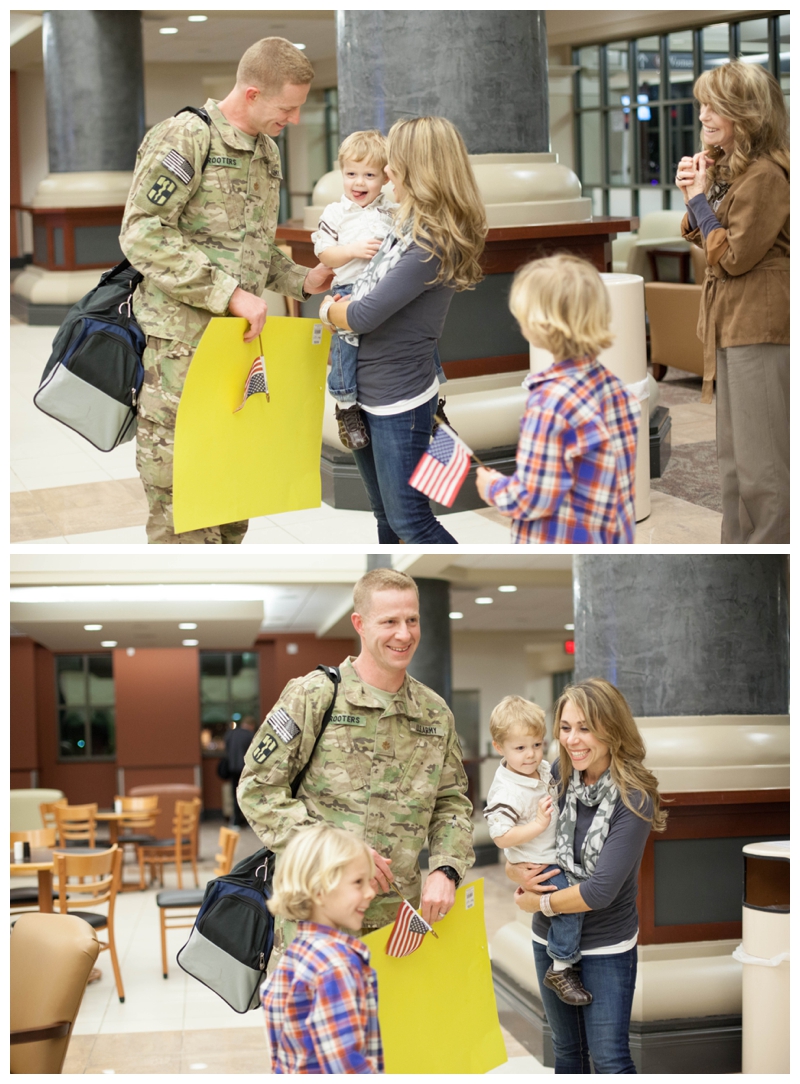 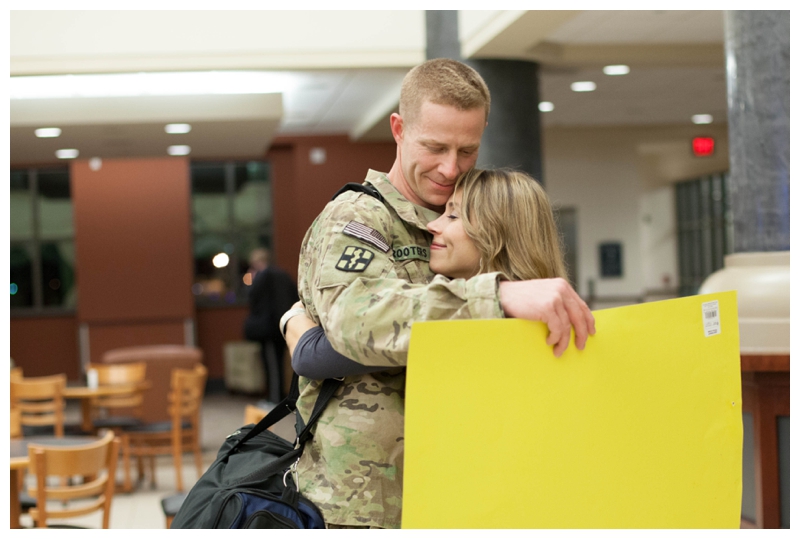 Will is so independent and knows what he wants and what he likes. He will be a force to be reckoned with, but for now, he’s all about Daddy. 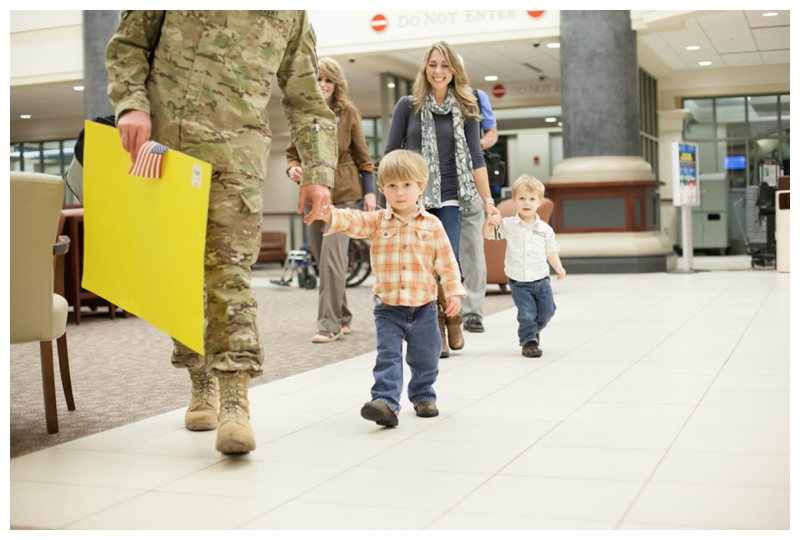 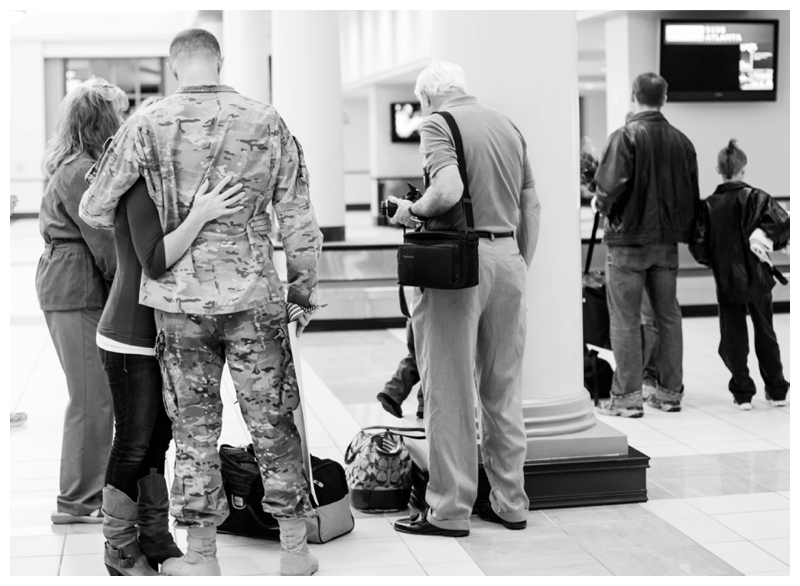 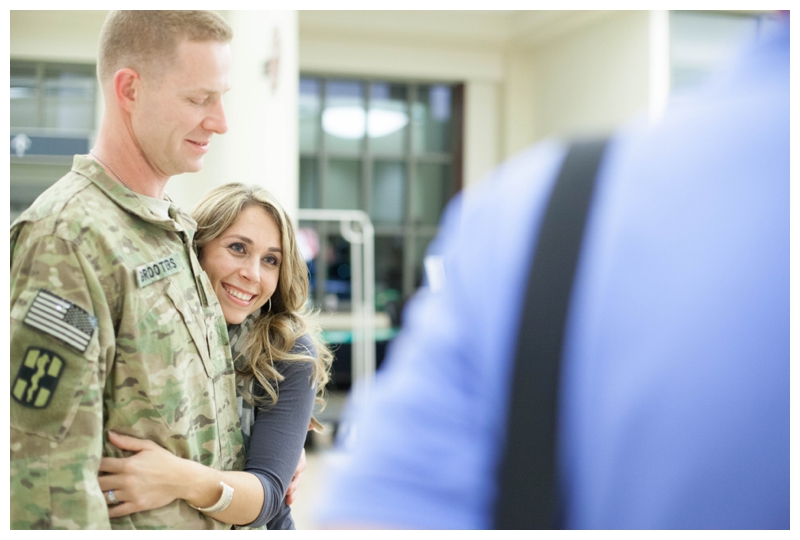 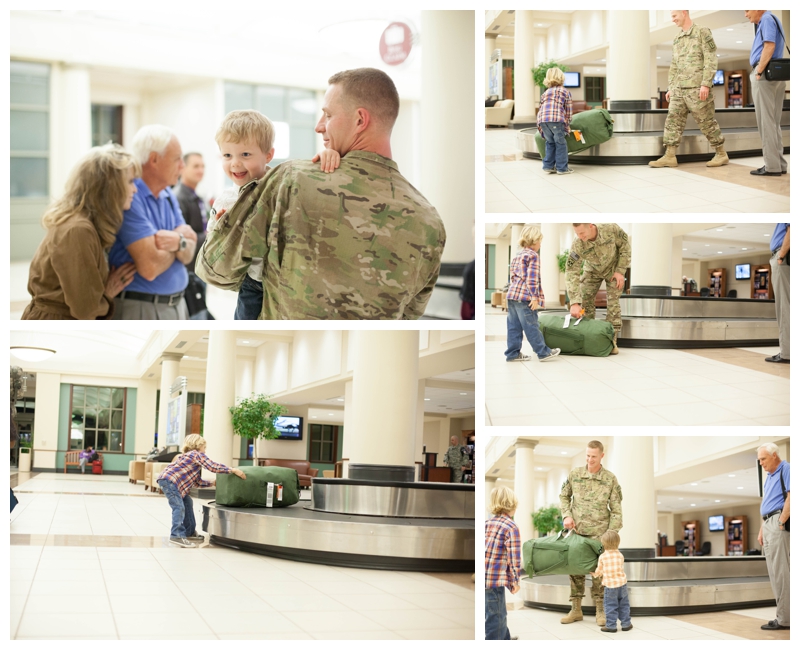 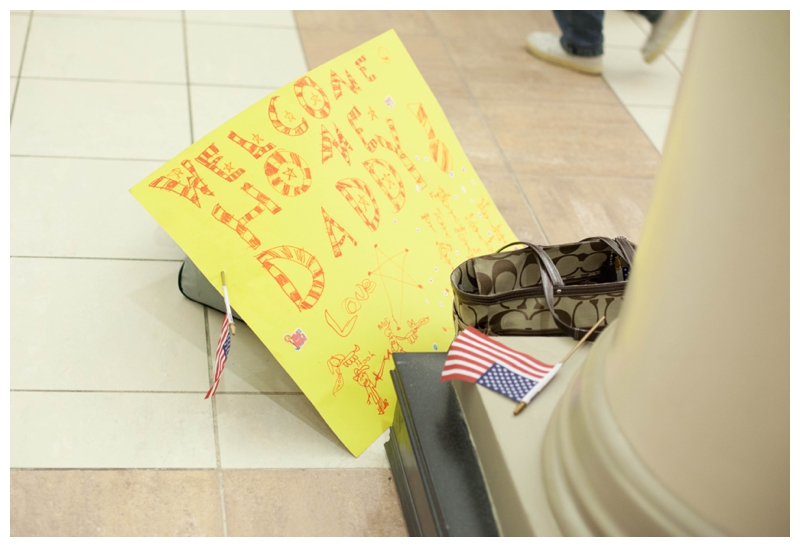 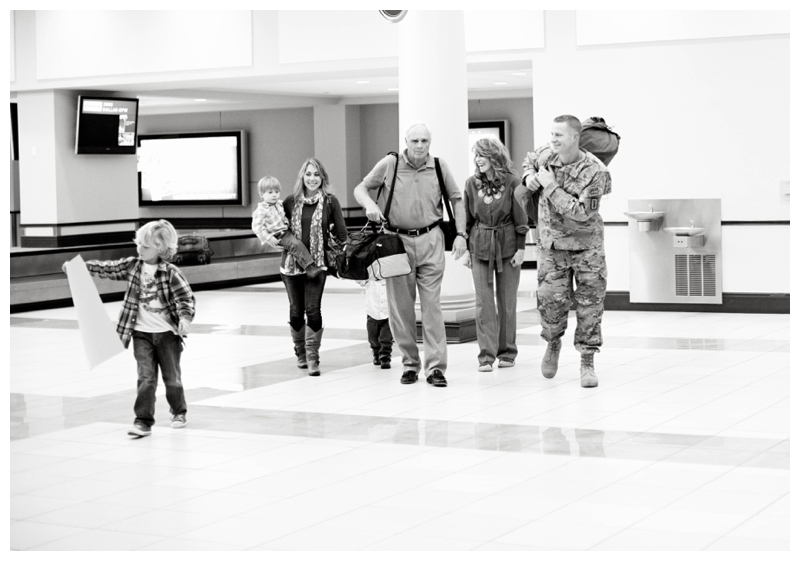 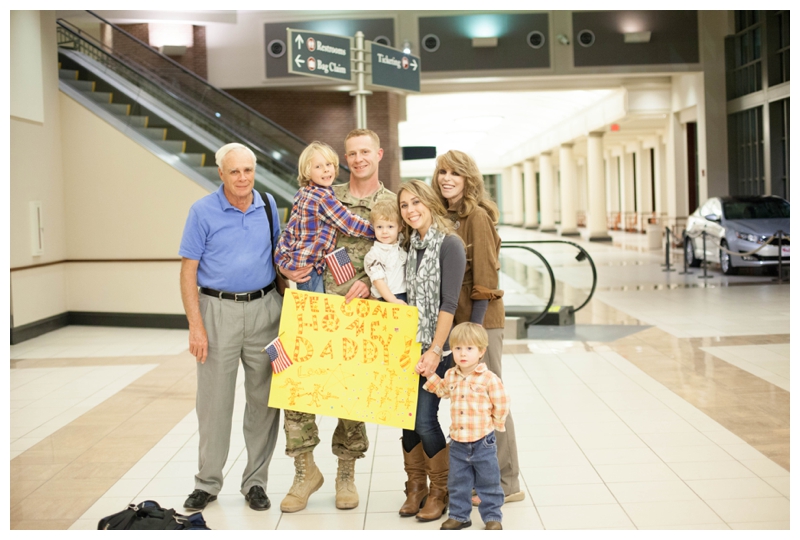 Charley has been home for four days now. I can honestly say that there was nothing awkward about him stepping back through the door as I have heard from many others. I’m thankful for that. It’s truly as if he had not left. There are little things to remind me that he was gone. Tuesday Charley had to go in to begin in-processing again. Will sat eating his waffle in his high chair when Charley came out of the bedroom in his uniform. Will suddenly looked very serious and went into observation mode. He gets extremely quiet, his eyes get wide and he takes everything in. I truly wonder what is going through his mind when he does this. Charley said he’d be back and Will’s eyes got watery and he started whimpering. It was as if he wanted to say something, but couldn’t trust himself to fully open his mouth without breaking down. He managed to squeak out the word “Daddy” a few times in a half whisper, half cry. It hit me then. He was gone for longer than the couple days it had felt like. It does affect our children even when they’re little. My heart ached. We ended up telling Will that he was going to the store and would be right back. Each day it’s getting a little easier. We were able to tell him today that daddy was going to work for  a bit. When Charley walked out the door, Will said, “Daddy going to store?” I said he was going to work and he said, “Daddy be back?” It makes me sad. After Charley left Tuesday morning and Will had calmed down he came to me and said, “Mommy no buh-bye.” I said, “No we’re not leaving, we’re staying here.” I didn’t understand what he meant apparently. He looked at me with his serious eyes and said, “No mommy go buh-bye.” It hit me then, again. I got down on my knees and reassured him that I was not leaving. It makes me cry as I type this.

Monday night I sat in the twins room waiting for them to fall asleep. Charley had put Drew to bed and when I came out I couldn’t find him. I walked around the house looking and finally assumed he was outside. I sat working on answering emails for a while and then I realized it had really been too long for him to be in the yard in the dark. I started searching again. I walked up and down our street. I felt panicky. It’s silly, I knew he was home, I knew he was fine, but I started feeling as though maybe I had dreamed he had come home…like I had done before. I walked around looking at all the gear laying around to help convince me he was really home. Finally, I sent a message to my neighbor asking if he was there. He was. Instant relief. I know it was odd to feel so worried, but again it made me realize he had been gone for longer than a day or two.

I guess it will take a bit of time to really feel like he’s home to stay for all of us. But we’ll go on our merry way and be thankful for every moment. Onward we go! 🙂 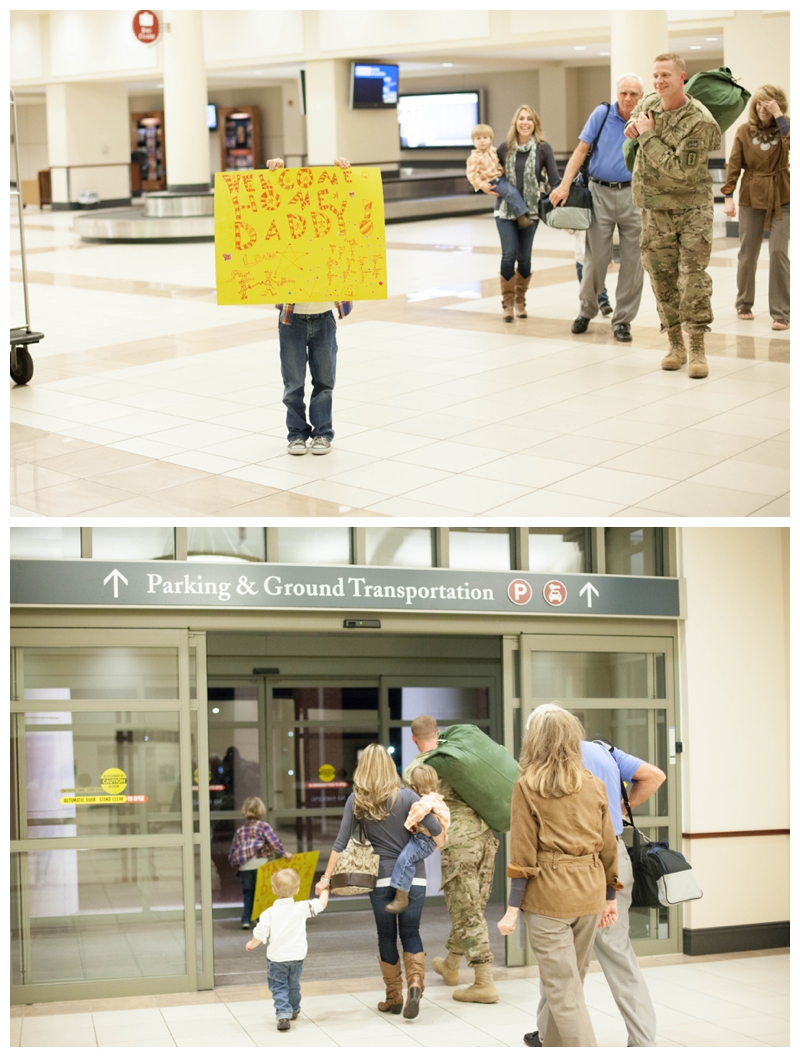 Thank you so much, Liz, for being there for us again. Thank you, Jill, for convincing me to book my photographer. And thank you everyone for all the amazing love, support, kindness, and general fabulousness that you showed and shared with us! I couldn’t have done it without you all. 🙂