Hiking in the Smoky Mountains

One of my most favorite hikes on our recent vacation was on this trail between Newfound Gap and the Gatlinburg area of the Great Smoky Mountains. We had seen bits of ice and snow left over on a few other trails, but it was so minimal that it left me wondering repeatedly how it had lasted so long and how it looked so out of place. The higher we drove up the mountain, the more snow we saw, but I didn’t expect this. It was breathtaking. Drew was absolutely elated as he slid on the ice and jumped in snow pile after snow pile. He was like a little Jack Frost, which when I mentioned that made him somehow smile even bigger. We did warn him repeatedly that he’d be freezing and miserable on the way down, but since he knows all, he assured us he would be just fine.

We made it to a natural rock arch that had steep stairs leading higher. They were coated in ice and we had to crouch down to allow room for the backpacks with the twins in them. Once we made it to the top, it was clear we couldn’t go any further. The uneven ledges became more narrow and were covered in ice. With about an hour of daylight left, twins on our backs, and Drew becoming a bit more grumpy, it was the end of the trail for us. We turned around and very carefully made our way down the stairs and crossed the bridge back into the snowy trail.

On the way back down the trail Drew became more and more unhappy. He was cold, wet, and carried a scowl like you have never seen. The sun was beginning to set and revealed some incredible colors in front of me. I found myself racing faster, no longer feeling the weight of Bradley on my back. I wanted to catch the colors! I kept coaxing Drew along who was behind me whimpering the whole way. When he grumbled out that his toes felt like they were bleeding, I turned around to probably say, “I told you so,” but instead I saw this. I was so entranced by the colors in front of me it didn’t occur to me to look back. I’m thankful for Drew’s “bleeding toes” or I would have missed this glowing mountain entirely. Oh, and don’t worry about Drew. He was completely fine, just cold from jumping in the snow, no bloody toes whatsoever. 🙂 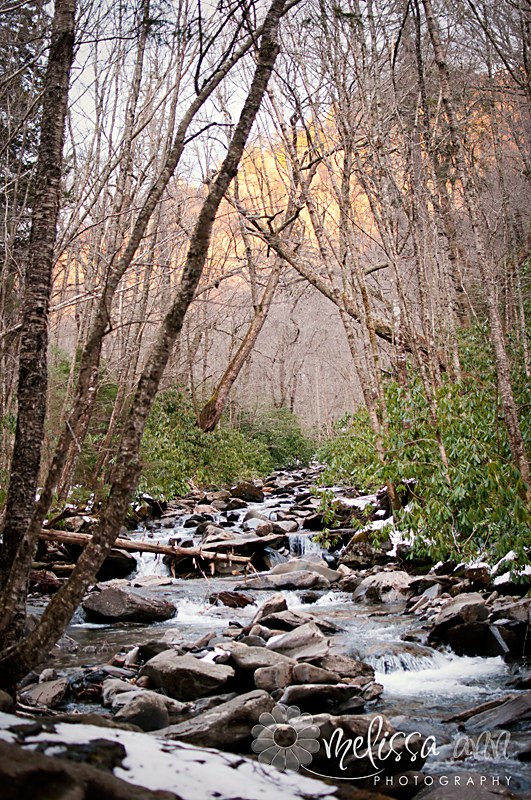