When my oldest lost his first tooth, it was shortly after a dear friend of mine had experienced the same thing with her son and she wasn’t prepared. She called me asking if I thought the Tooth Fairy might leave an IOU for another day. Me, being me said absolutely not, this is the FIRST tooth! She can’t leave an IOU for the first tooth! So we came up with things she could do last minute and it ended up being quite adorable. There was a special little bag and some cool coins left behind for that little boy!

Enter my turn. I did order a little tooth pillow off of Etsy after our conversation, but I wasn’t prepared at all other than that. I went out to a session and when I returned I was greeted by my toothless little boy! My fabulous babysitter had pulled it out because it was bothering him and while I was super excited, I felt unprepared.

Now, I know that in this day there are TONS of things on Pinterest and people begin feeling overwhelmed and like they are not good parents if they are not doing all of these little things. Please know that I feel that way to an extent and this post is not at all intended to make you feel that way. I simply wanted to share what I did in a pinch on that first night and what has now become a tradition.

So, once all the littles were in bed and a-snooze, I went to work scouring Pinterest for an idea to make this special. I didn’t have an extra new toothbrush or cool toothpaste to leave. I didn’t even have those fun flossing sticks, so I started searching. I found something about a tiny little letter being left behind, which I fell in love with. Tiny things are always cute! So, I set to work writing a little bitty letter and creating a little bitty envelope for it (made out of the shape of a heart, super easy). After that, it didn’t seem to be quite enough, so I added glitter to the inside (fairy dust, of course) and then searched for how to fold a dollar into the shape of a tooth.

Seriously, I did. I searched for how to make a tooth. I found examples of a turtle, a cube, some cool flowers, and a heart, but no tooth. So, the heart looked easiest out of all of those and since it was already beyond midnight, the heart would have to do. I sprinkled a bit more fairy dust and left it in his tooth pillow. 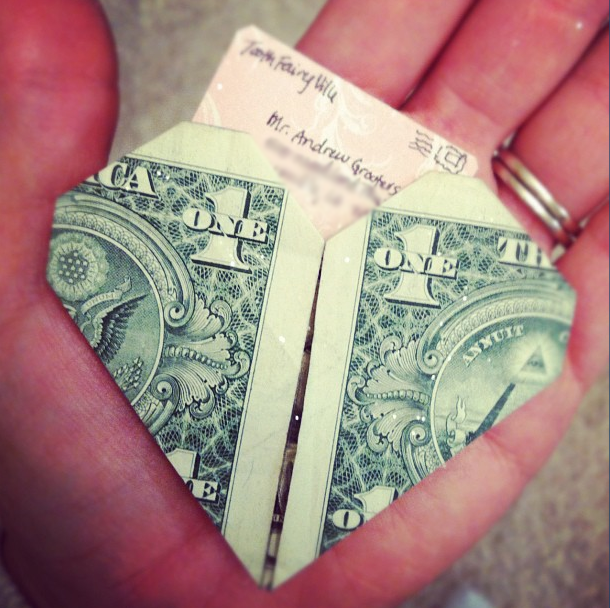 For the second tooth, there was a dollar, but it wasn’t folded all cutesy, however, there was another little note 🙂 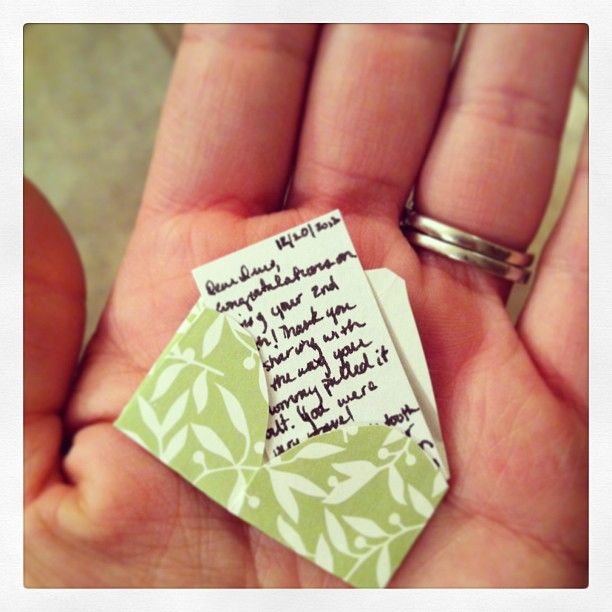 Yesterday, Drew came home with his tooth in a bag. I had just seen this on Pinterest, which included a little letter typed from the Tooth Fairy and an envelope. I printed them both out the way I was instructed from this woman’s page and discarded the letter since it was for a first tooth and I like hand written notes better. But the envelope was super cute and had the lines of where to fold and a little postal stamp. Perfect!

I went a little crazy with the fairy dust this time because with the second tooth, even though I added it to the envelope, it fell out somewhere along the way. Drew opened that one and was disappointed that she hadn’t left him any dust. This time I was sure to use some glue on both the letter and the dollar 🙂 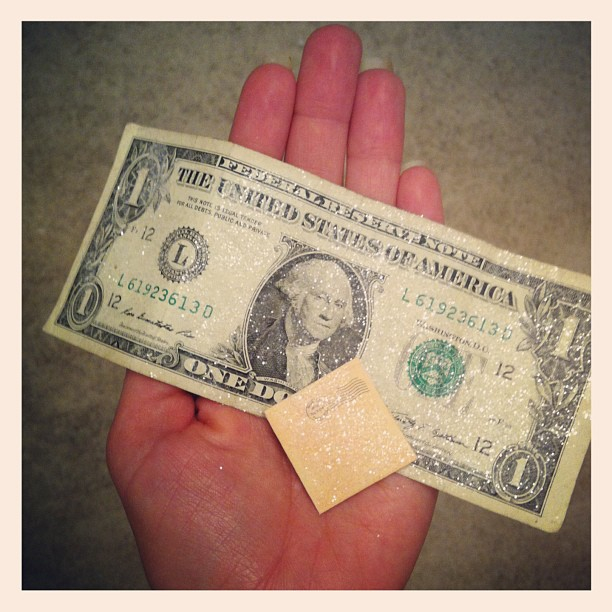 So, there you go. It might not be super fancy gifts or a lot of money to some, but we like to keep it simple, but special. It doesn’t take a lot of time to do at all 🙂 I’d love to hear some of your Tooth Fairy traditions! Be sure to comment below with what you do.