Harry Potter Themed Birthday | It’s All In The Details

For my son’s 8th birthday, he opted for a Harry Potter party. Wahoo!!! Is there anything better than entering the wizarding world? I think not. We had a blast putting all the details together and I’m sharing them with you in the event that you need some party inspiration!

We began the party with our “Have you seen this wizard?” photo op. I used a cardboard box, cut a hole in it and blackened the edges with spray paint. We set it up on our living room table and behind it, we set up our reaper from Halloween to act as a dementor. Each child that came to the party had to don the robe, grab a wand, and give me their best evil wizard look. Below are just a few of the terribly dangerous wizards that passed through. 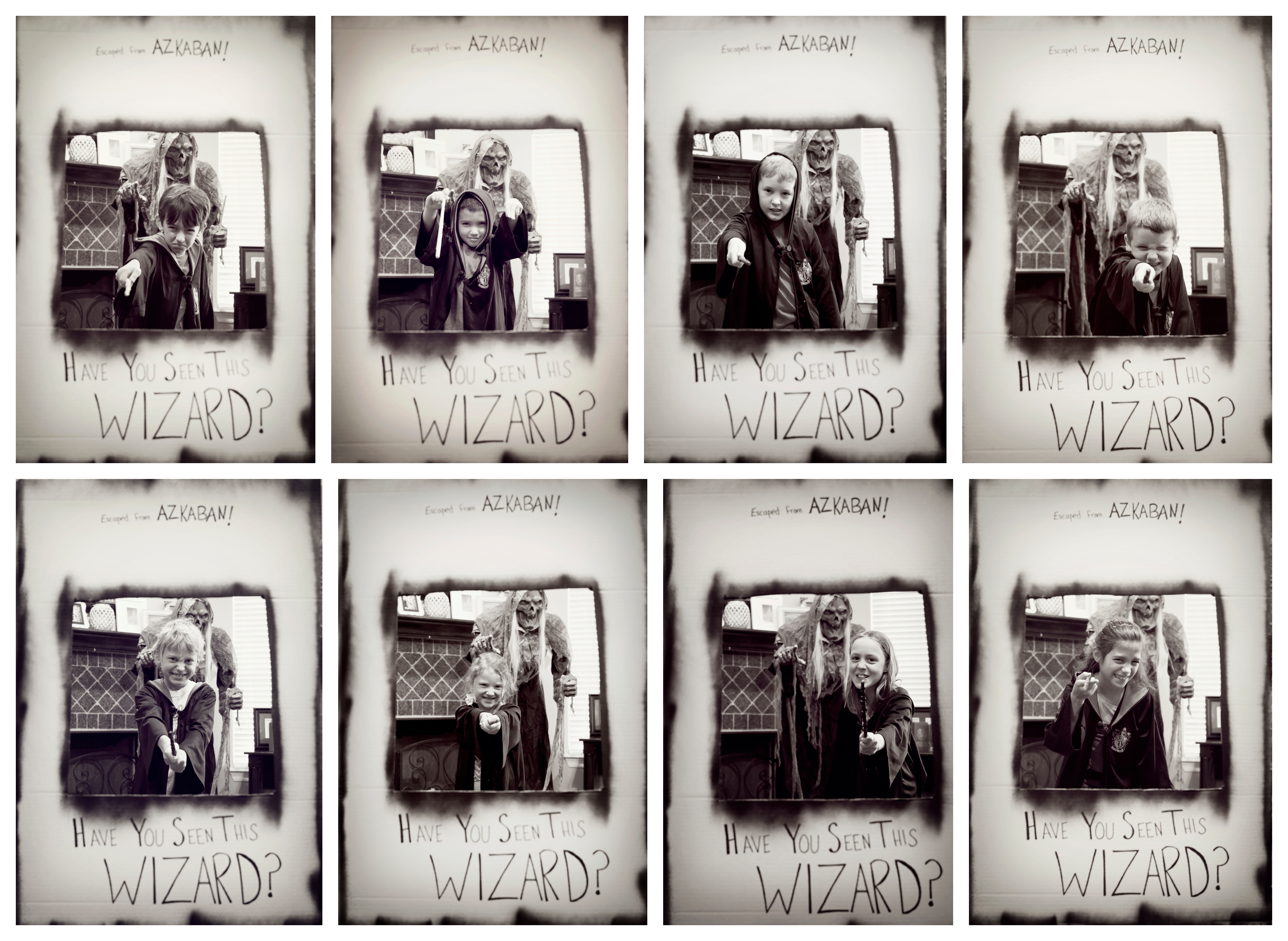 I had small details all around the house. Drew had been Harry Potter for Halloween (shocker), and these photos were from our little mini shoot I did. They turned out so fabulously, I had to display them at the party. 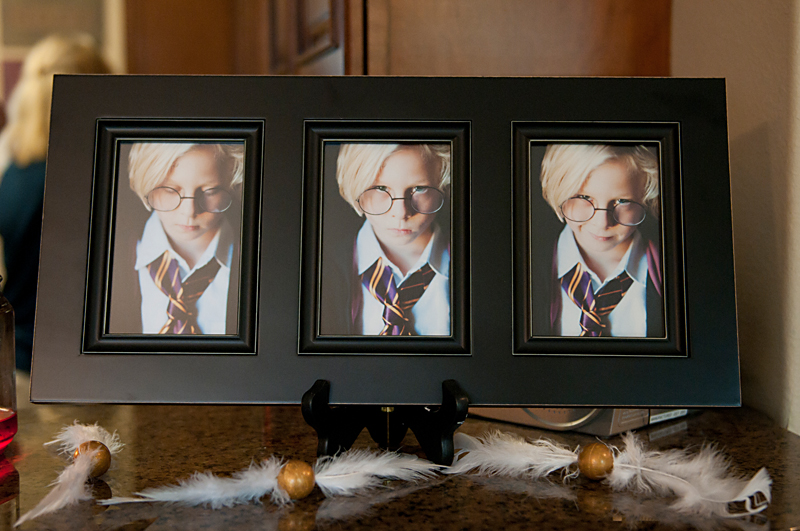 You can’t have a Harry Potter themed birthday party without Hogsmeade! We created our own little version of it with some fun wizardy themed foods. I had every intention of photographing things without the plastic wrap, but as soon as people started arriving there was no way I could get back to it. 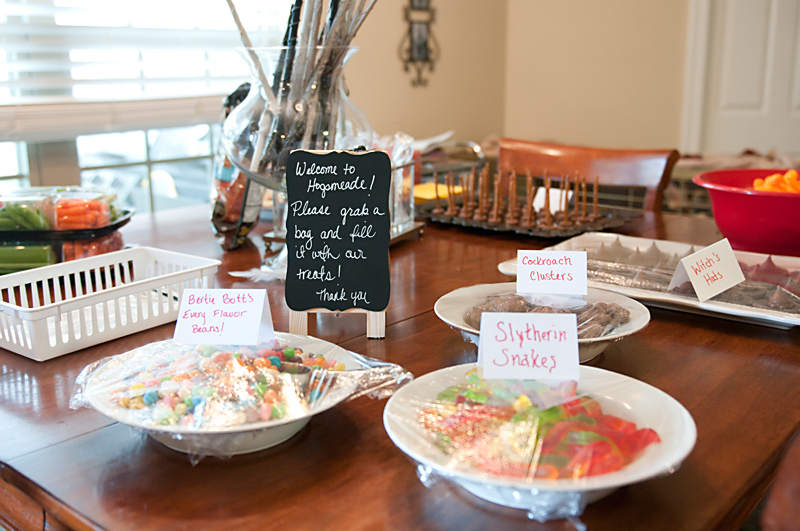 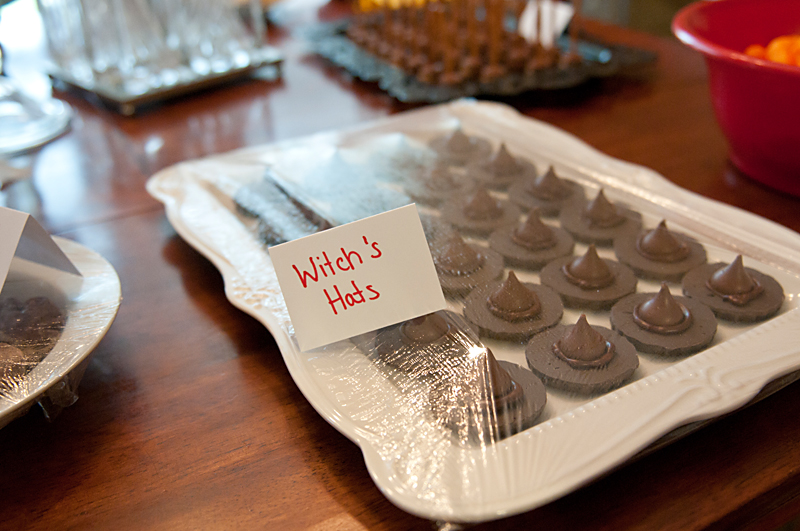 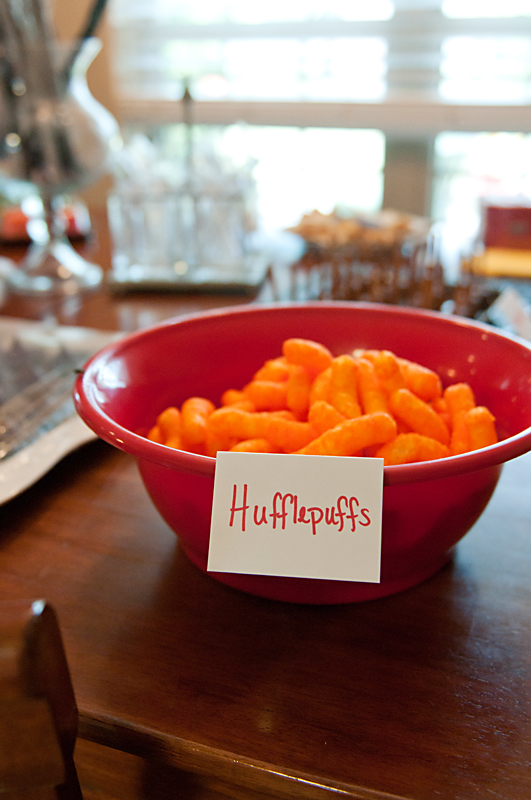 Now, these wands, y’all, these are awesome. We spent days ahead of the party making these fabulous wands after finding this tutorial from Pinterest. You will have to click through the pages to see each step, but it’s so worth it.  These were one of the party favors for the guests. Each kiddo left with their very own, unique, magical wand as none of them were exactly alike. Even if you are not having a party, go make these wands, they are just too cool not to try. 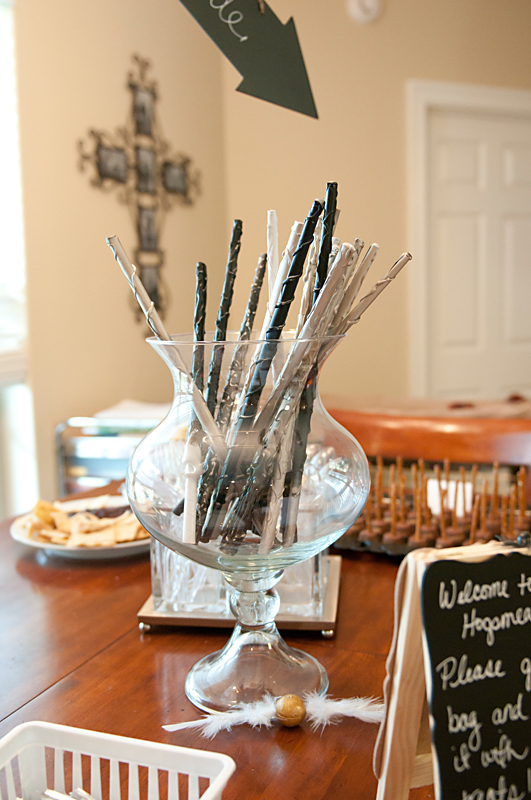 Drew’s birthday is in the beginning of August. We live in the south. August, in the south. Hot doesn’t begin to explain it. This time of year is tricky, because we love to have parties at home, but there’s only so much you can do with so many kids in your home in the summer. We opted for a water slide, which was great, except for the rain. This seems to happen almost every year. There’s a threat of rain on his birthday and I have to scramble for back up ideas. I was prepared this time, though. When it got to be a bit much, I called the kids over to the tent for potions class.

We began the lesson by experiencing Eye of Newt. The green container held hundreds of them and they were passed around for everyone to touch, if they were brave enough, before they were tossed into our cauldron. If you are looking for your own Eye of Newt dealer, you can find them in the floral section of Walmart. These are actually water beads. They come in a small packet of tiny little colored balls. Place them in a container and add water about a week before you need them. They absorb the water and grow. They also last for a VERY long time. I had those suckers in there for about two years before I dumped them when we had to move. 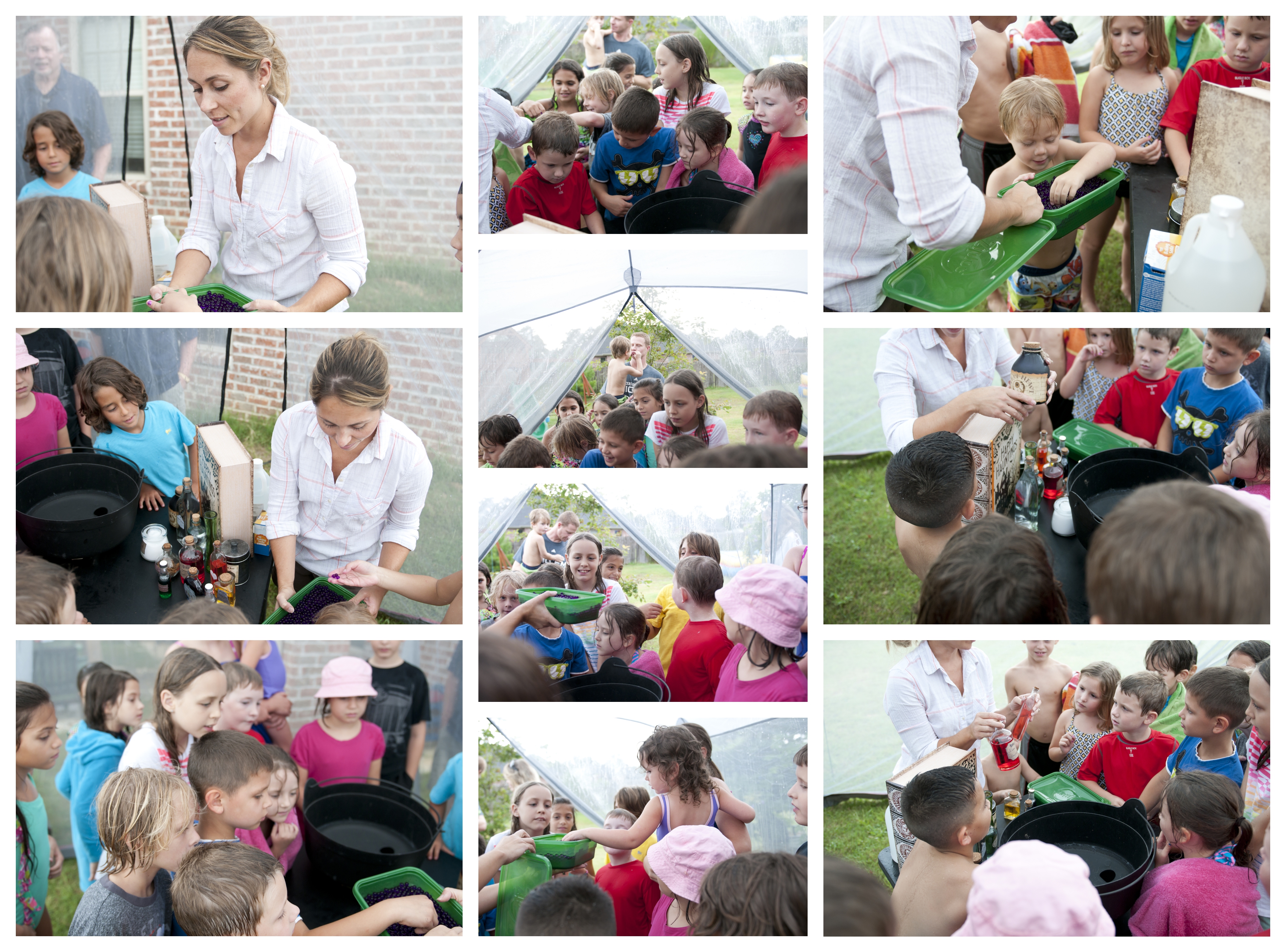 After the Eye of Newt we added ground toad bones (baking soda) and a “special liquid” (vinegar). The kids all had a chance to add the ground toad bone to our potion. Of course, it started bubbling and the kids LOVED it. 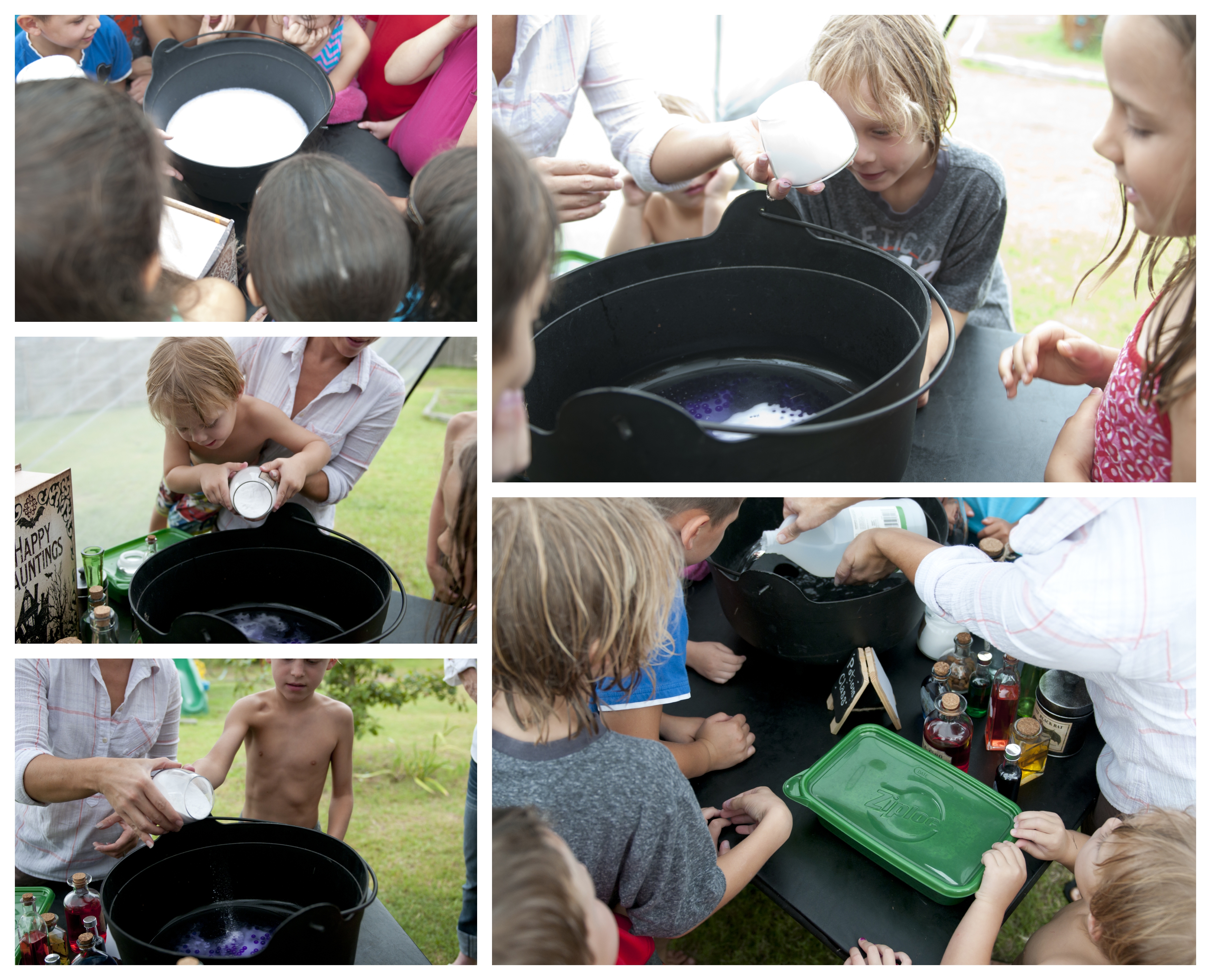 The rain stopped just as we completed our potion lesson and the kids hit the water slide again. To try to keep some order with all the kiddos, we played a game of Catch the Golden Snitch. I used a small styrofoam ball and painted it gold. Then I stuck two white feathers into it to act as wings. Not exact, but it worked for our needs. I stood at the side of the slide and as the kids went zooming down I threw the snitch in the air. They had to try to catch it on their way down. It was a lot harder to catch than the kids expected, which was perfect. 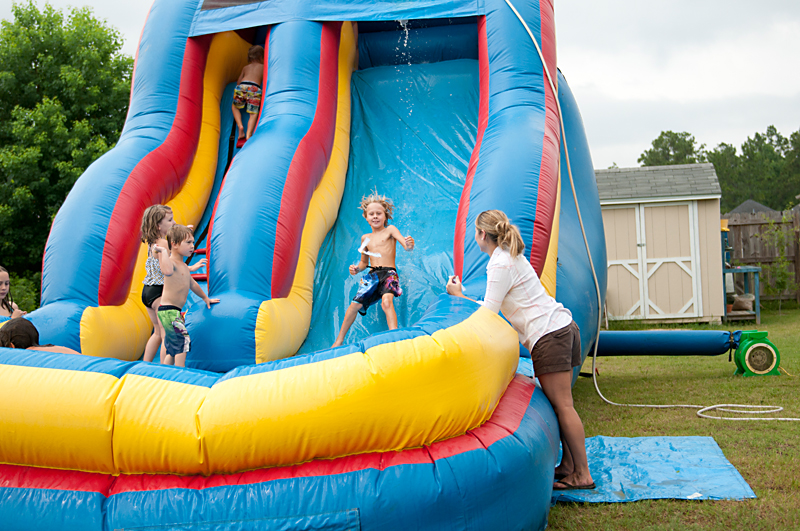 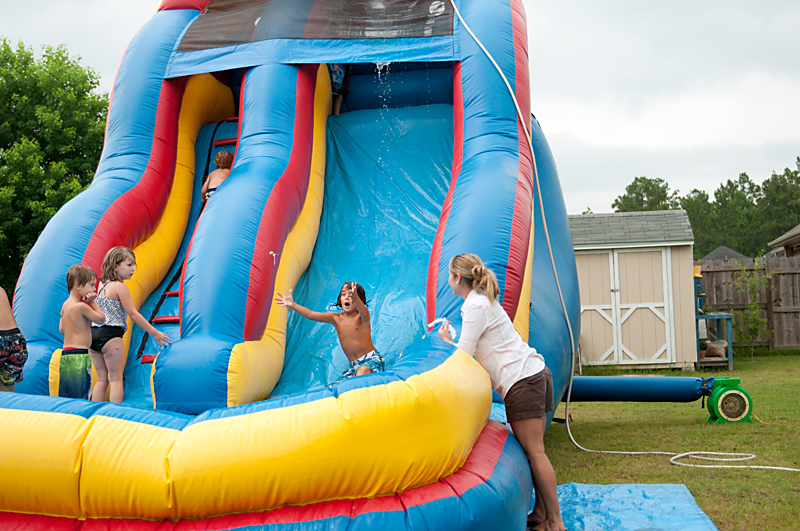 Cake time! Ok, the cake was a beast. This was such a huge project and I had tried making my own birthday cakes before, which were major fails. This time around I did a practice cake with my dear friend, Marcela. We laughed, made a mess, and came up with solutions to my self made problems 🙂

I think it turned out pretty darn good seeing as how I am NOT a cake artist. Not even close. I ordered the book cake pan off of Amazon and was thrilled with it. I’m not sure if the link provided was the exact one, but there are several to choose from. It was much larger than I expected, but it worked out perfectly. We also had a Hogwarts kit that I used on a simple sheet cake. 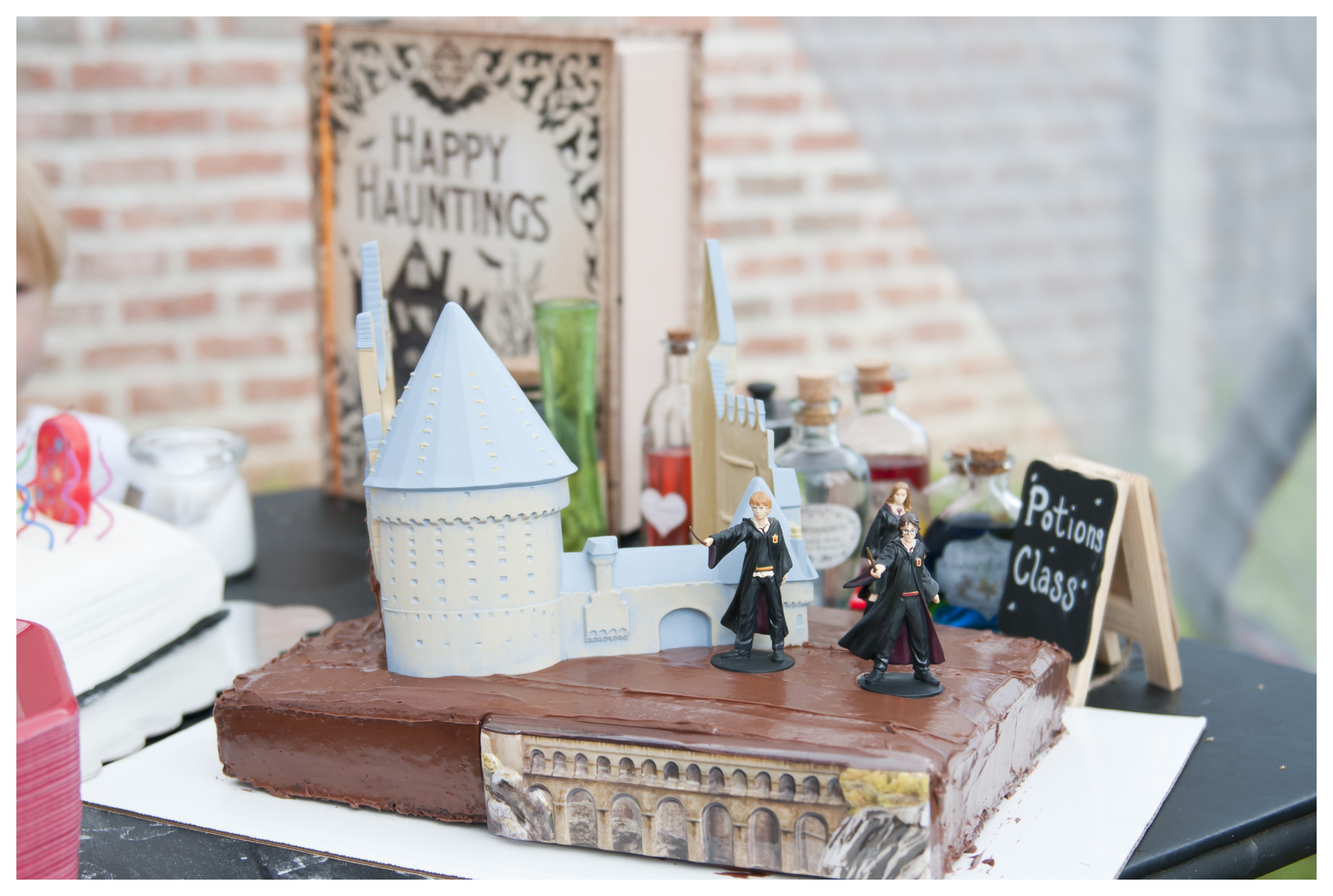 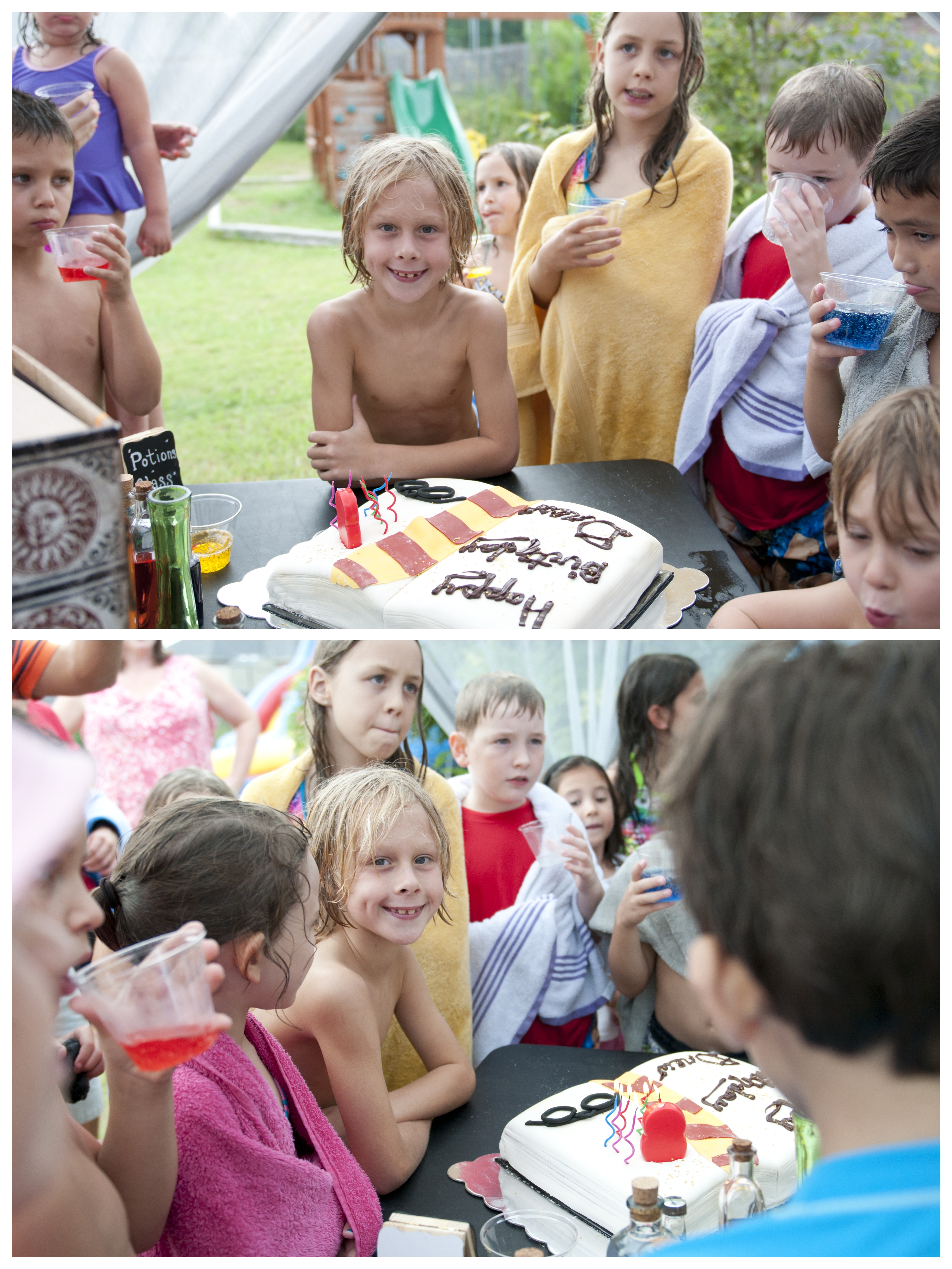 One thing I did not take pictures of, but thought was such a neat addition, was the magic drinks. Each child received a clear plastic cup to fill with water or Sprite. What they didn’t know was a day before I had dropped two to three drops of food coloring  into each cup. Set the cups aside and allow them to dry. They don’t notice it when they receive their cups, but when they fill it with their drinks, the drinks turn the color of the drops that were added. They really thought it was neat.

After all the fun, cake, and gifts it was time to say goodbye. We thanked our guests for coming and as they left with their unique wands, they were instructed to take one vile of Felix Felicis to wear around their necks and one invisibility cloak. Those were the easiest to creat :oP

And that was a wrap. It was a magical day full of fun and excitement. I’m so glad to have done it, but I’m hoping the twins will wait a few more years before they ask for a Harry Potter party. I know I will be ready then!